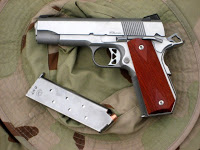 Good question. I mean, the gun is over 100 years old and still popular. As its name implies it’s age. No major army is fielding a service rifle that is that old. Yet, police, military and even some SWAT teams still use the 1911. So then, Why Does Everyone Love The 1911?

Well, there are a few reasons that I can speak to. First of all, it’s a proven design. Prior to the 1911, there were few semi automatics. Almost all handguns were revolvers. In fact, even after the 1911 was adopted by the US military, most police agencies around the US stuck with their trusty revolvers well into the 1980’s.

The 1911 had made a name for itself in the military and ultimately became seen as a true shooter’s gun – largely in part because of Lt Colonel Jeff Cooper. Cooper was a former Marine, firearms instructor, and writer who made popular the “modern technique” of handgun shooting. His technique of shooting used two hands instead of one and focused on bringing the firearm up to eye level while using the sights.

Although this modern technique could be used with most any type of semi automatic pistol, the Colt 1911 is universally associated with Cooper and his technique, especially in the early development and implementation of it. Cooper was one of a few different men who revolutionized the way we used and perceived handguns. His legacy carries on today in many forms.

As police agencies started to see the need for more advanced training and cutting edge weapons, they started to adopt many of Jeff Cooper’s ideas and concepts. While the 1911 in particular didn’t ever become a darling of police agencies nationwide, many elite units within various departments did adopt it – such as FBI HRT/SWAT, and many others.

The 1911 is definitely outdated in some ways. It is all steel construction (generally), doesn’t hold a lot of ammunition in the magazine (7-8 rounds usually), and the higher quality more reliable versions are more than twice what you would pay for a Glock or something comparable. The prices can get astronomical with custom shops turning out 1911’s in the $2500-3000 range as of this writing.

Undeniable Qualities of the 1911

However, the 1911 has several undeniable qualities. For starters, it is the gold standard for triggers. It’s generally so smooth that even the most novice of shooters will have a hard time screwing it up. The trigger pull usually has a slight amount of take up with about a 5lb trigger. It also has a crisp reset. Custom guns can get you even better triggers, but even most of the basic 1911’s have a better trigger than most other brands or types.

The smooth trigger and the natural point of aim (due to the grip angle) make the 1911 a true shooter’s gun. In my opinion, the 1911 doesn’t have to be your favorite, but any real firearm enthusiast has a love for shooting the 1911. They are a joy to shoot, and the weight of the 1911 makes shooting it, even in .45ACP, quite pleasant. The recoil is very manageable for most shooters.

The result is, people tend to really enjoy shooting them and they tend to be very accurate. They are also one of the most aesthetically pleasing handguns out there. It’s like a piece of functional artwork. Just holding it in your hand feels very comfortable.

The 1911 is very thin. This is a desirable trait for conceal carry. The weight and lack of capacity rule it out for me, personally, for CCW or most “serious” use. However, that doesn’t bother some people – and many others have found ways to modernize the weapon so far as they are happy to use it. You can get 1911’s in aluminum and polymer frames, with bobtails, in 9mm (and nearly any other handgun caliber), with picatinny rails, and a variety of other custom changes.

It’s not unheard of to see a police officer with a 1911 on his hip, even in today’s age of polymer 9mm’s.

I believe there are better guns out there in 2022 for CCW, self defense, and military/police applications. That said, I love the 1911. Give me a few boxes of .45ACP and a 1911 and I will have a great day at the range. I’ve owned several 1911’s, and for some reason, I feel like I should always have one, or two – or more – many many more.