Which Caliber for your AR15 Carbine? 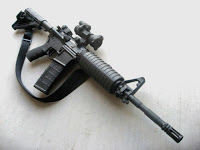 A large part of this is subjective. You may have particular criteria you want/need your AR15 carbine to meet, you may or may not reload your own ammo, etc… You may even have several AR15’s in a variety of calibers.

That said, of all of the various calibers out there for the AR15, I prefer the 5.56. There are several reasons for this. For one, 5.56 is plentiful and easy to get a hold of and much of it is made domestically. If for any reason, production and shipment of ammo from foreign countries were to cease certain cartridges would lose a lot of appeal and would suddenly cost MUCH more than currently.

Also, it is fairly inexpensive, when compared to most other rifle rounds. This means you can shoot more often and stash more of it. I believe that shot placement is paramount. The best way to improve that is through shooting. 5.56 costs less to shoot than many other calibers.

The 5.56 round is an underrated round in my opinion. No, it’s no death ray, but it is effective when placed in the right spot. The light round allows you to carry a lot of ammo. Light recoil allows for fast follow up shots. It is also a very flat shooting round.

Most of the various AR15 calibers are not nearly as common. Most are impractical, but the biggest reason to avoid them is because of parts availability for AR15’s in those calibers. If your primary defensive carbine is in another caliber such as 6.8, I recommend you keep plenty of spare parts/magazines and get into reloading.

The .223Wylde chamber was created as a bit of a hybrid chamber that could also shoot both .223Rem and 5.56, and do so more accurately than a 5.56 chamber.

Shooting .223Rem in a .223Rem chamber will slightly increase the accuracy and velocity of the .223Rem round as opposed to shooting it in a 5.56 chamber. The .223Wylde bridges this gap just a little bit better for both cartridges.