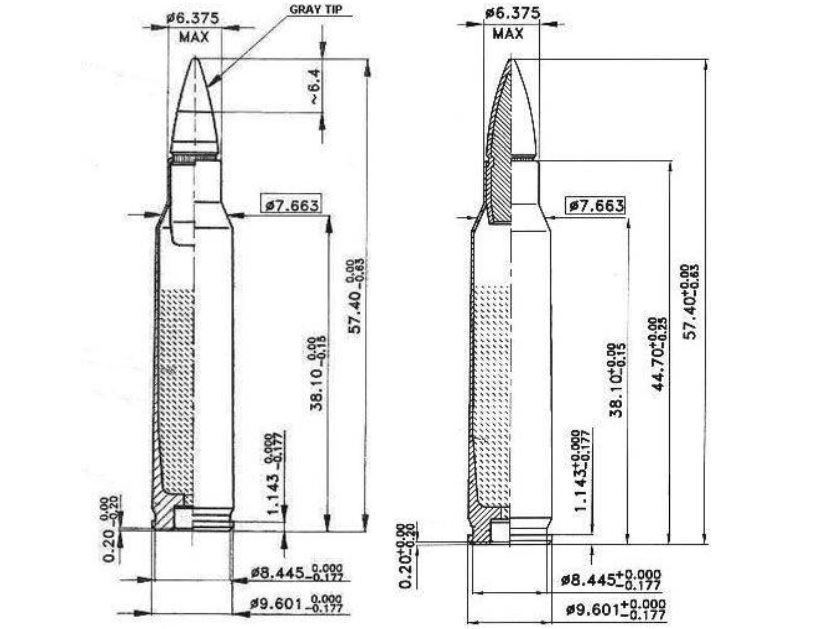 If you are a gun enthusiast, or just own a few firearms chambered in 5.56x45mm NATO, you have probably wondered what the difference is between M193 and M855 ammo. Both of these rounds are popular among AR-15 shooters, but they perform quite differently from each other. In this blog post, we will take a closer look at the difference between these two rounds and help you decide which one is right for you!

It should also be noted that while we commonly refer to much M193 spec or M855 spec ammo, technically that is a US military issued ammo, and it is unavailable to the public. Some ammo may be labeled as being M193 or M855. However, true M193 or M855 is made by Winchester Ammunition at the Lake City Army Ammunition Plant and is only issued to the US military.

Winchester does make M193 and M855 spec ammo for sale to civilians labeled as XM193 and XM855 respectively.

M193 is a ball cartridge with a lead core and full metal jacket. M193 has a 55-grain bullet that is great for close range penetration. This round was designed to be used in the original M16 rifle with 20″ barrel and later models with similar barrel length. It was also designed for slower twist rates, such as 1/12 barrels.

M855 is also a ball cartridge with a lead core and full metal jacket. However, the bullet weight is 62 grains and it has a steel penetrator in the tip of the bullet. In spite of this feature, it is not classified as “armor piercing”.

The bullet used in the M855 round is referred to as SS109. It is easily recognized by the “green tip” which it features. This round was designed to be used in the M16A2 and later versions. The M16A2 had a 1/7 twist, which was much faster.

Many people think the twist rate of the barrels has to do with bullet weight, but that doesn’t tell the whole story. It actually has to do with bullet length. Steel is lighter than lead, so even though the M855 is only 7 grains heavier, it is even longer than a normal 62gr all lead bullet would be.

The main difference between these two rounds is the bullet weight and design. The green tip M855 was given that feature to help troops distinguish between the two rounds. It was important to know the difference because you didn’t want to shoot M855 from an early 1/12 twist M16. The round will not be properly stabilized, and therefore will not produce precise results.

This gives the M193 cartridge an advantage because it is more lethal at a longer range than the M855. Additionally, M193 is generally considered to be better at fragmenting in general. This has to do with its higher velocity.

The way fragmentation works in 5.56 is this. When the bullet hits soft tissue, it wants to turn around and travel with the heavier end first. As the bullet tries to do this in soft tissue, forces are literally ripping the bullet apart. Usually at the cannelure, which is the weakest point of the bullet. The faster the bullet is traveling, the more violent and explosive this action is.

In spite of the steel penetrator, M855 is not particularly great at penetrating cover as far as rifle cartridges go. However, it is better than M193 in this regard. So, you might just want to ask yourself which one you think you prefer based on that info. They both serve fairly well, but they have a few strengths that the other does not.

M193 is a very popular choice for self defense. It is known to be lethal and effective at close range, which is often the case in home defense situations. Additionally, it is less likely to over-penetrate and hit an innocent bystander.

M855 is also a viable choice for self defense. While it may not be as lethal at closer ranges as M193, it does have the advantage of better penetration. This can be important if your assailant is wearing body armor, or if there is a barrier such as a car door between you and them.