What is the difference between a magazine and clip? 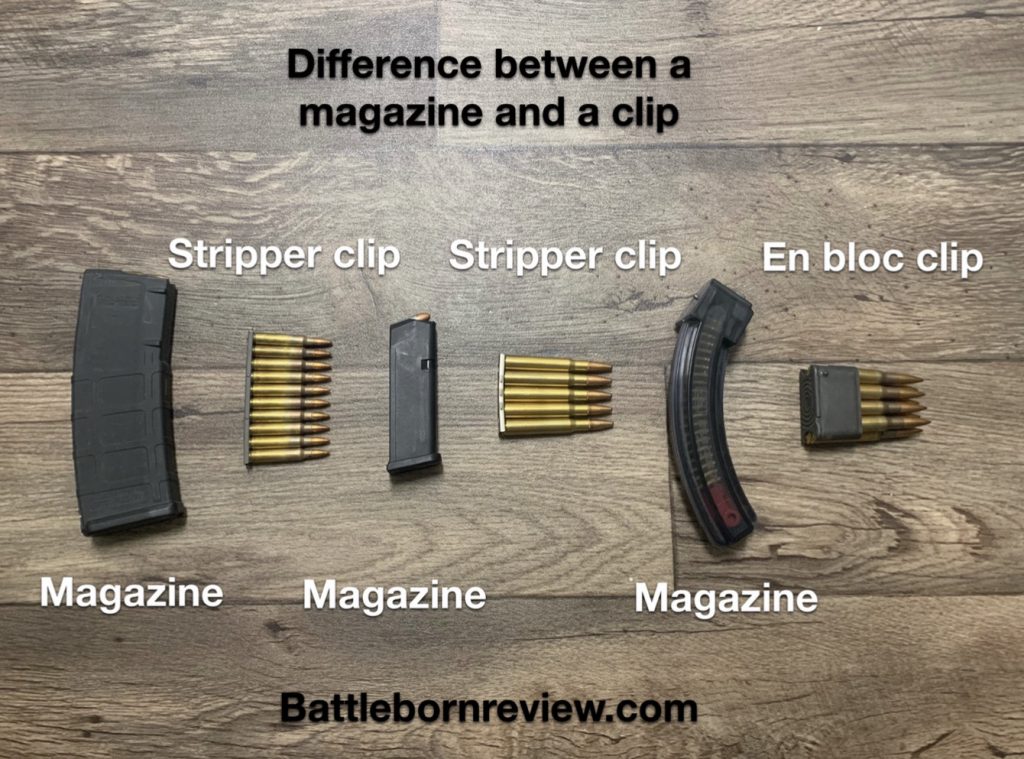 It is a common question, so we want to show you the difference between a magazine and clip. Magazines and clips are both used to store ammunition, but there are some key differences between the two.

The picture above demonstrates the differences between the two.

Many inexperienced shooters (and even some long-time gun enthusiasts) are confused by the distinction between a “clip” and a “magazine.” They might use the terms interchangeably or simply refer to magazines as “clips”.

It is important that we speak in correct terms. To do otherwise makes us look and sound foolish and ignorant. Professionals, enthusiasts, and weapons experts are well-versed in the real usage of each word. So, I’m attempting to assist new shooters learn the facts and dispelling firearm misconceptions and myths.

The last thing you want to do is sound like an ignorant anti-gunner – and that is what you sound like to most when you misuse these terms.

Magazines are loaded prior to shooting. Loading several detachable magazines at once will allow a shooter to reload quickly.

Magazines are inserted directly into the firearm and remain in place while the weapon is firing.

When the magazine is empty, the shooter will:

Clips can make the loading of a magazine faster and easier. In some instances, a clip is actually required to allow the firearm to function properly. An example of this is the M1 Garand.

Clips can be used to reload many fixed and detachable magazines quickly.

Stripper clips are pre-loaded, often in bandoliers, clip pouches, and/or ammo cans. In order to use with a fixed magazine, the clip is usually:

Clips are reusable many times in most instances. However, stripper clips can lose tension or become weakened from metal fatigue and wear over time.

Using a clip to load a detachable magazine

Simply press the rounds into the magazine and they will strip off of the clip. Repeat as many times as needed. Using this method, you could reload a 30 round magazine in a matter of seconds.

If you are having a hard time stripping the rounds off by hand, you can invert the magazine and place the rounds against a hard surface to load the magazine.

Most modern firearms make use of detachable magazines. However, depending on the design of the firearm, some modern guns, and many older designs use fixed magazines.

Examples of guns with fixed magazines are:

Many of these guns, particularly military and police models would make use of clips in order to expedite the reloading process. However, many guns with fixed magazines don’t even use stripper clips, and are loaded one round at a time. Hunting rifles, lever actions, and pump shotguns are a good example of this.

Up to that point, detachable magazines were seen as a liability. Additionally, magazines are seen as sort of “disposable”. While they can be reloaded and reused, they are often left on the battlefield during combat. Magazines usually come in a variety of different sizes depending on your needs.

Most magazines can be reused over and over so long as they are taken care of. However, springs and guides may need to be replaced or lubed and cleaned from time to time. Take care not to dent a magazine. Bent or cracked feed lips can also create feeding issues with your firearm. Mark bad magazines for disposal or to be fixed as needed.

In summary, the difference between a magazine and a clip is:

I hope this helps to clear up any confusion that you may have had on the topic. Please feel free to share this article with anyone who may need help learning the difference.