Utah to Designate 1911 as State Firearm 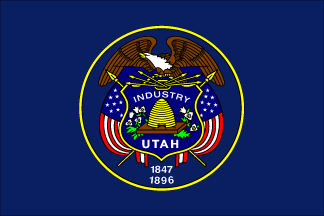 The 1911 is an iconic design that set the standard for semi-autos into our modern era. 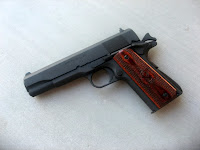 Above is a slightly modernized and upgraded version of the M1911A1, made by Springfield Armory. 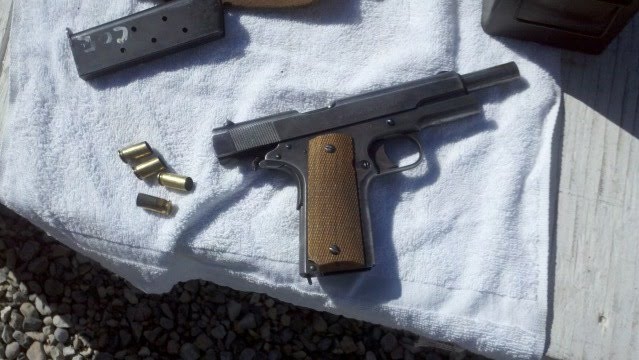 Now as a way of honoring him and his legacy, as well as commemorate the 100 year anniversary of the weapon, Utah has proposed to make the 1911 it’s state gun. Unfortunately, some of it’s opponents are calling this proposal a bad idea in light of it’s timing, since a mass shooting took place a few weeks ago in Arizona.

Utah, which has several state symbols, including the Seagull and Beehive, is a conservative state with generally less strict gun laws than many other states, is no stranger to controversy. It was one of the first states to grant women the right to vote and is famous for an old (and now mostly forsaken) custom, polygamy.

This mostly rural state was originally settled by Mormons (otherwise known as Latter-day Saints, or LDS), and is still populated with a Mormon majority (thought to be around 55-60%). Although somewhat peculiar to most, Mormons are conservative Christians, who tend to vote along with the Christian Right.

These Mormons were seeking religious freedom in the 1800’s after they were run out of Illinois and Missouri. The church leaders, knowing they would need to travel into the wild west, filled with dangerous animals and in some cases hostile Indians, sought the help of a gunsmith by the name of Jonathon Browning in Nauvoo Illinois, who would convert to Mormonism, to help design and maintain weapons for the group of settlers as they moved west. He would have a son in Ogden Utah, John Moses Browning.

John Moses Browning was the father of many modern firearms designs and created many weapons that would be used by the US military, including the BAR (Browning Automatic Rifle), the M2 Browning Machine Gun (still in service today), the M1919 machine gun (also still in service), among others. Other notables include the Browning Hi Power (the first “high capacity” 9mm handgun), as well as the creation of a handful of calibers, including .25ACP, .32ACP, .38ACP, 9mm Browning Long, .380ACP, .45ACP, and .50BMG.

He would go on to be credited with 128 firearms patents.

The M1911, chambered in .45ACP, was the standard sidearm for the US military from 1911 to 1985, and still is used by some special forces. The weapon is still popular amongst shooters and Law Enforcement as well. It’s known for having an exceptional trigger, accuracy, and ability to upgrade it.

A close up view of a modern 1911 in the hands of an Operator in Iraq.

Modern firearms continue to use ideas and concepts based on the form and function of the 1911 pistol. 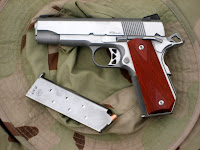 Above is a picture of an even more modernized version of the 1911. It’s a Semi-custom “Commander” style Dan Wesson with night sights, a “bobtail”, a shorter 4.25″ barrel (as opposed to the standard 5″), an extended safety, a beavertail, custom trigger, and a commander hammer, in stainless steel.