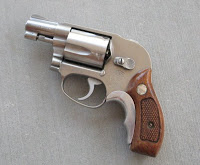 My dad’s S&W model 649. This is the older model, chambered in .38spl only (unlike the newer ones chambered in .357Mag with a slightly longer barrel as well). The shrouded hammer allows you to pull the firearm from your pocket without the hammer getting “snagged”.

I am a semi-auto kind of guy so you are getting this from a somewhat biased point of view. The revolver is old technology and has several drawbacks. That said, revolvers have their upsides as well, and I see the positives of them in limited use.

I was turned on to the J-frame S&W by my dad, who carried a model 649 “Bodyguard” (his personal owned weapon) for years as an FBI special agent. He was issued a Model 10 originally and owned several of his own personal (Bureau-Approved) revolvers throughout his career. His 649 is the only revolver he ended up keeping (He, along with the Bureau are sold on the Glock).

The thing that I like the most about these small revolvers is that they are easily concealed and lend themselves to pocket carry (in a pocket holster), which is amazingly convenient. This is likely because of it’s thin design. Most pocket carry semi-auto firearms are not very reliable and/or are chambered in a very small caliber. The .38spl is not a particularly powerful round, but I like it better than .32ACP or something smaller. Afterall, the .38spl was the standard LE round for decades. With improved loads in +P and better bullet construction in recent years, it’s even more effective.

Revolvers are known to be extremely reliable. Simply because they do not require the reliable ejection of casings after each shot. If you pull the trigger and the gun doesn’t “go bang”, you simply pull the trigger again. They are terribly simple to maintain and operate. The average person can figure out how they operate just by picking one up.

They also tend to be easier to use for many women as well who have a more difficult time racking the slide of a semi auto.

They do not require extra magazines. These firearms are time tested.

Drawbacks are many though. The DA trigger is very long and doesn’t reset into single action like many semi autos do. Sights are not very good. Because of those two things, I do not personally shoot revolvers very well. Capacity is limited (5 rounds in a J-frame) and reloading is slow (especially without a speed loader).

Despite the drawbacks, I like the idea of the revolver as a CCW weapon. It’s a compromise. I don’t like it for all scenarios, but they are a good CCW option. If you are not satisfied with the ability to conceal your baby Glock or the unreliability of your Kahr PM9, you might consider a J-frame revolver.