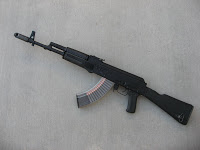 The AK-47 is arguably the most successful “Assault Rifle” in history. Some estimates put the AK at about an unprecedented 80 MILLION AK’s worldwide, making it quite ubiquitous. This design, created by a Russian Tank Commander, is robust, reliable, and quite simple.

It has often used by the enemies of our great country in wars in the time since it’s invention, including but not limited to the Soviet Union, Vietnam, Iraq, Afghanistan, as well as many terrorists and enemy combatants. It is commonly thought of as “the bad guy gun”.

Mikhail Kalashnikov began working on developing a rifle in the 40’s after he was injured in battle. The end result was the AK-47 (short for “Avtomat Kalashnikova model 47”), which went into service for the Russians in 1947 and has remained in service (at least in variations, including the AK-74 among others) since that time.

I intend to write about the AK-47 clones (primarily all semi-autos) that we see here in the US, none of which are “assault rifles” by definition. Many here though refer to the AK-47 clones out there as AK-47’s or simply AK’s, or even AKM’s. AK-47’s are chambered in the Russian cartridge 7.62×39, which is usually a 123gr bullet traveling at about 2300-2400fps. 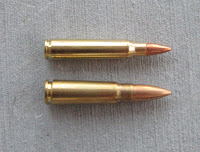 Here you can see the tapered case of the 7.62×39 round (bottom) compared to the 5.56 (top) which aids in the reliability of the rifle by making it easier to chamber and extract rounds (less friction). It also adds to the extreme curvature of the magazines.

This is a pretty effective round at ranges inside of 400 yards. It also hits plenty of power and usually does a good job of turning “cover into concealment” as it will smash through mild or thin steel, glass, cinder blocks, wood, and many other common barriers. It’s drawback is that the round is fairly heavy to carry (compared to a 5.56) and experiences some decent amount of bullet drop after 300-400 yards.

A USMC Capt. models with an underfolder AK-47 in Afghanistan. Not my favorite stock for the AK. They look good, and they get the stock out of the way when they are folded, but they are uncomfortable for me. I prefer the fixed stock and the side folding stocks. Here in the USA, the AK has a strong loyal following. That is not surprising, given the reliability, simplicity, and longevity of this design. They are fairly easy and inexpensive to mass manufacture.

Most AK’s here in the US not surprisingly are imported as whole rifles or made from parts from AK’s of various origins including but not limited to Russia, China, Romania, Yugoslavia, Hungary, Bulgaria, Eqypt, and a whole host of other communist and former communist states, Muslim, and third world countries. Another upside to the AK is that they tend to be fairly inexpensive to buy for most people who are seeking a battle carbine for themselves, especially on a budget. Magazines are plentiful and also fairly inexpensive.

The reliability of the AK is a result of it’s loose tolerances and large gas piston. However, these two factors also hurt the AK in the field of accuracy. Many think of it as no more than a “spray and pray” type weapon. Others have found that the accuracy claims are usually greatly exaggerated or can be helped by using quality ammunition and buying a higher quality AK.

Let me say that, of all of the battle carbines out there, the AK really does have the worst ergonomics I can think of, particularly when it comes to reloading. This is my personal opinion, but I feel like I can make a strong case for it.

For starters, the bolt handle is on the wrong side (if you are a right hander) because to manipulate the bolt, you must take your hand off of the pistol grip and pull the bolt all the way back and let it go. Your support hand should do this but trying this with your support hand as a right hander is awkward. 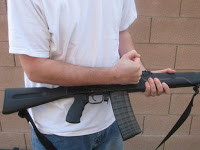 Secondly, there is no bolt hold open on the last round. Imagine shooting your last round in a firefight without knowing it only to pull the trigger and hear the dreaded “click” instead of “bang”. Not good. In addition, when reloading, you must cycle the action like I mentioned above, instead of just letting the bolt slam home on a loaded mag.

Lastly, and going along with the whole reloading aspect, the position of the magazine release and the way in which you remove and insert the magazine is strange and requires a rocking motion which takes practice to get right quickly.

Even with practice, reloading takes about twice the time for a magazine change with an AK than with something like an AR15.

An upside about the magazines when compared with the AR15 is that the magazines, although heavy are rugged. Many people make a big deal about the safety, but that aspect of the AK doesn’t bother me as much as it does to some critics of the AK.

In fact, I have discovered a way to make the most of the placement of the safety, thanks to some folks online who have shared it. 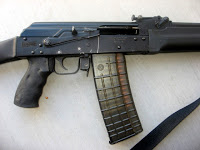 Although the ergonomics are not very good and hurt you the most during reloading, I don’t think this a deal breaker.

If you are particularly fond of the 5.45 and have access to plenty of ammo, mags, and spare parts for it. I do like the 5.45. Many people will point out that Kalashnikov himself did not like the 5.45 and opposed it’s adoption. However, I fail to see how that is very relevant. Kalashnikov was not a ballistics expert. He didn’t design the 7.62×39 cartridge. He likely designed the original AK in that caliber simply because that is what he was told to build it in.

Overall, I think the AK is a fantastic weapon. It’s not my first choice, but it is still an excellent choice regardless. There are good reasons that it has been mass produced on the scale that it has been and price is not the only reason.

There is a lot to be said for it’s simple, inexpensive, reliable, robust design.