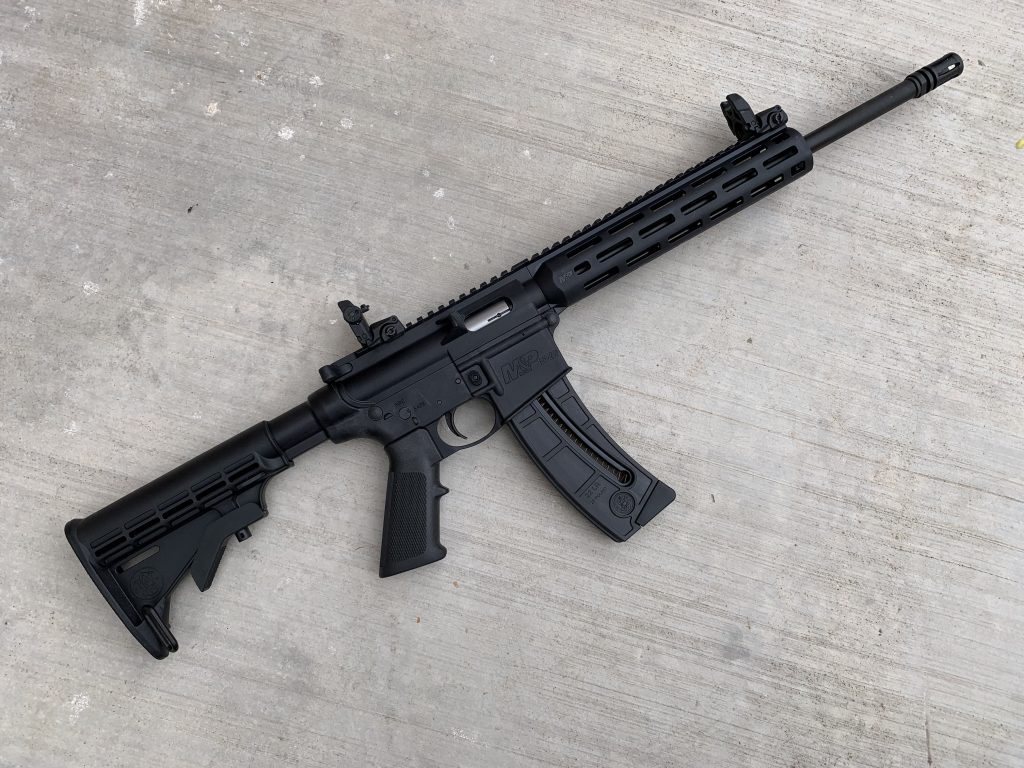 Then one of my brother’s got one and he raved about it. I shot his and was immediately impressed. It really got me thinking about one for myself.

Then, a short time later I took the lead on a shooting day during a family reunion with my wife’s family. Her brother had a S&W M&P 15-22 and many of the people who were shooting that day were gravitating to that gun over everything else we had.

I had thought that AR-15’s (in 5.56) would be easy enough to shoot and handle, but we had some pretty inexperienced shooters in this group. They kept asking to shoot the S&W M&P 15-22.

For me, an AR-15 is a very low recoil firearm, but for new shooters, an AR-15 can still be intimidating.

Since that time, I have shot it many times and it has worked extremely well. I’ve also had many other times where I have taken out new shooters, and it always seems to be a favorite among kids and new shooters.

I’ve convinced many other friends to get one since then as well.

It is primarily made up of polymer, which should be plenty robust enough in this caliber. However, that makes it exceptionally light and easy to hold for kids.

However, not all parts are interchangeable such as the charging handle, BCG, etc.

Since it is a blowback design, it has no need for a gas tube/block and there is no buffer tube. In fact, you could rig the lower to take a folding stock if you are handy enough. That is what one of my brother’s did with his.

*Don’t do that unless you really know what you are doing though.

Low recoil and affordable .22LR with the same controls, feel, and look of an AR-15. Perfect for getting comfortable with a “scary evil black rifle.” Also, doesn’t break the bank when you are hosting a shooting day for new shooters.

25 round magazines are standard, work well, and affordable. I stocked up on mags at gunmagwarehouse.com.

The flat top upper lends itself to easily mounting optics. A threaded barrel makes it easy to add a suppressor or other muzzle device. The S&W M&P 15-22 comes with an A1 Flash hider and the standard 1/2×28 thread pitch.