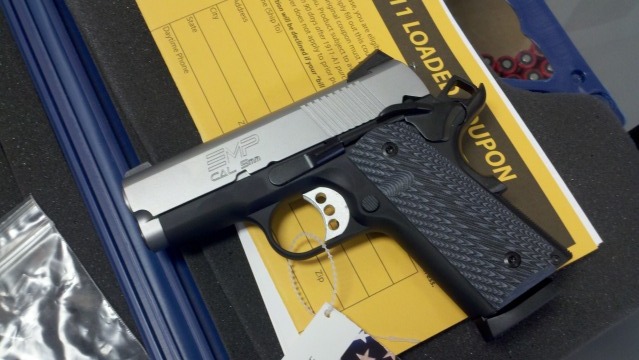 Well, I have had this gun for a month or so now. We are past the 200 round break in, and I would like to go into detail about this gun and give you my thoughts on it.

This is what it looked like when I picked it up. I had it shipped from Buds and the price was right around $1100 once I got it out the door if I recall correctly.

If you don’t know much about the EMP, it was built from the ground up by Springfield as a 1911 chambered in 9mm or .40S&W. The 9mm is an aluminum frame, the .40 is a steel frame. I can tell that a lot of thought went into this gun and it had a lot of appeal to me from the beginning for several reasons.

If you follow my blog you can tell I am in a bit of a 1911 phase right now. Who isn’t? I’ve been waiting for a single stack 9mm sub compact Glock for some time, but since I cannot get one of those, I have been looking at the smaller 1911’s as conceal carry guns. The single stack obviously helps with concealment and being in 9mm, you don’t lose as many rounds as you do with a .45 for obvious reasons.

Now, on to the EMP. When I first got it I was worried as it would not chamber a JHP initially. However, I got it out to the range in short order and put a bunch of FMJ through it. By the end of the trip, I had it feeding JHP’s. Out of the 100 or so rounds we put through it at that time, I had two minor stoppages. Both times the round stopped on the feedramp and simply required a small tap on the rear of the slide to chamber the round (once was with a JHP, once with an FMJ).

Since that time it has worked flawlessly.

The gun grouped well at 10 yards. 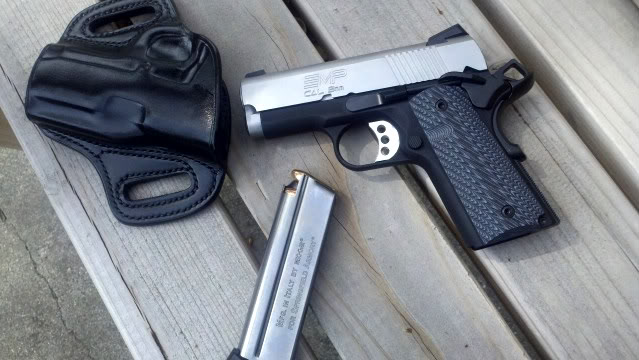 This gun has a smaller grip and uses specific mags, made by Mec-Gar. I did have a problem with one of the 3 mags it came with. I couldn’t load any rounds into it because the follower was hitting the front of the mag as I would try and load a round.

I contacted Springfield and sent in the faulty mag (at my own expense) and had one magazine shipped back to me in return. 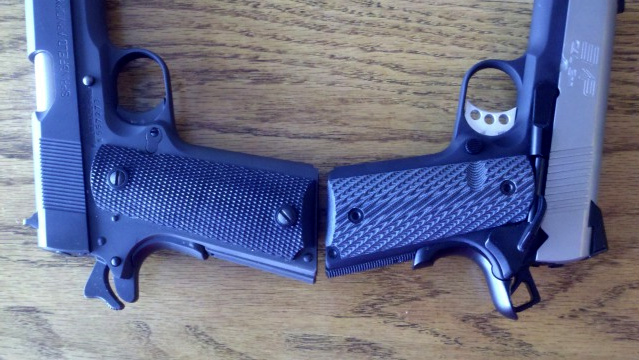 Here you can see the difference between the grips of the EMP and my Springfield Milspec .45ACP.

So far it has been a good CCW gun. It is light, thin, carries decent firepower for a compact CCW gun (9 +1), and well fitted. It is fairly easy to CCW with, although I haven’t carried it much for a variety of reasons (breaking it in being one of them). The slide is beautiful. Recoil wasn’t bad at all.

The night sights work well and are very important on a CCW or duty carry gun. 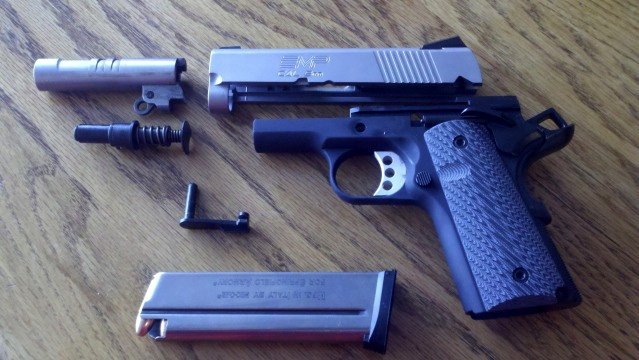 Here is a picture of the gun field stripped. Field stripping the gun is actually very easy. There is no barrel bushing as there are in traditional 1911’s. 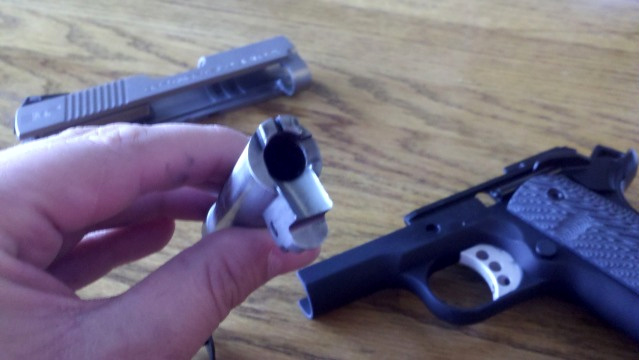 This feedramp was a little rough when I first got the gun but I can tell that a few hundred rounds has smoothed it out a little. It should only get better from here is my guess.

This gun will likely become one of my preferred CCW guns in the near future. I still want to take it to the range a few more times and test out carry loads before I start to trust my life with it. 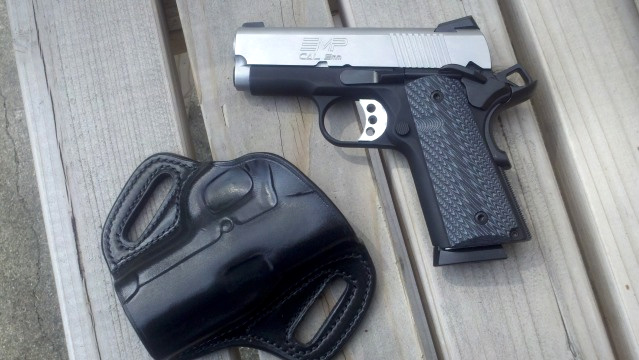 Other than a few small differences, it really just feels and handles just like any other compact 1911. Like all 1911’s, the trigger is very good.

I do have a couple of complaints about it, although they are fairly minor. The single biggest complaint I have is the magazines extending and not fitting flush with the gun. I can understand making mags like this, but only in addition to FLUSH fitting magazines, particularly in a CCW gun.

It is my understanding that someone out there modifies mags for people that will fit flush, but I am really shocked that Springfield doesn’t do this and include at least one flush fitting magazine with every EMP they sell.

Another thing I don’t care for is the Ambi thumb safety. Sure, lefties may like it, but they are a minority and I would think that it would be better if they sold it with a standard safety. Also relating to the thumb safety, I cannot for the life of me figure out why they don’t come with a low profile thumb safety.

In my opinion, those are two issues Springfield should address immediately. They could have hit this one out of the park had they gotten those two things right.

I wouldn’t mind a bobtail of some sort as well but Springfield doesn’t seem to acknowledge the need for as small as possible grip in a CCW pistol.

These are things that can be fixed, with some extra money. However, I just think SA should have gotten it right from the beginning.

This gun fits my needs for CCW due to the light weight, night sights, thin profile, and excellent trigger, assumming it ends up being reliable, which it appears it will be.

Since this original writing I have taken this gun out several more times.

Despite my complaints in the past, I have really grown to LOVE this gun. It has been nothing but 100% since my original outing. I notice the rounds through this gun have somewhat polished up the feedramp and helped the action to become very smooth. I am very accurate with it and really enjoy shooting it. It conceals pretty well for me as well.