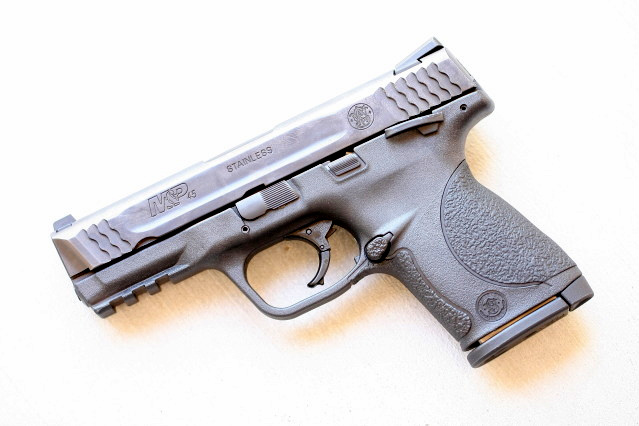 Like many of you, I’ve heard a lot of good things about the M&P series by Smith & Wesson. However, my own personal experience with the M&P is non-existent with the .45ACP’s and I’ve been unable to even find many reviews on the M&P45, little less the M&P45C.

My very first impression of this gun was that it appeared very well made and that it was well thought out. I really like the Melonite finish; it looks and feels extremely good on the forged stainless steel slide.

I like the loaded chamber indicator, the ability to switch out the grip panels in order to better fit various shooters, ambidextrous controls, and the stock 3-dot sights which are dovetailed. Take-down was fairly easy and is similar to that of a Sig P226 with a small exception. The grip angle is nice and the gun sits low in the hand very similar to a Glock for me.

One cannot help but compare it to the Glock, for several reasons. The Glock was the original polymer framed handgun that saw some real success. As such, it is often used as a template from which others draw inspiration for the new trends in handgun designs. S&W already got sued in the past for patent infringements on the Glock with the Sigma.

I am a big time Glock advocate and have owned and been shooting Glocks for years. Polymer frames, unique trademarked surface finishes, internal “trigger” safeties, similar grip angles, etc… I am not saying that S&W is guilty of patent infringement with the M&P. I am simply stating that is obvious that they are trying to take some of the good ideas behind the Glock and add their own improvements.

I like the size of this gun and the size of the grip, for a .45ACP. This is helped by the thin magazine which sacrifices capacity, but for me, the increased comfort is worth it. I am still getting used to the grip, but I like it more each time I pick it up.

When we took it to the range it had no problems of any kind and ran an assortment of FMJ and XTP hollow points.

The recoil was a little more than I was used to with my 1911, but I didn’t find it to be uncomfortable.

I did have one big problem with this gun. I was very disappointed with the trigger and I think that it affected my ability to shoot it well when I finally got to the range as I was shooting low with it, and somewhat inconsistent as well. So was my brother. More practice, dry firing, and range time, might be able to partially cure this for me to some degree, but the trigger did seem a little “gritty” to me as well. Not sure if this will improve over time but it was probably the biggest turn off for me of all.

In the end, I certainly feel that the trigger had a negative effect on my ability to group exceptionally well with it.

With 7 rounds at 10 yards, this was the best group we could muster between me and my brother. That was discouraging because I can usually group much better than that with most any gun.

This particular model had an external safety. Although I liked that it was ambidextrous and liked the 1911-ish placement of it, I personally would have preferred no external safety on a handgun such as this.

At this point, I am not going to sell my Glocks and replace them with M&P’s. That said, this particular model does impress me, and although I like my .45ACP’s to be in the 1911 design, I think this pistol deserves some serious consideration, especially in a CCW role and it does appeal to me more than any Glocks do in .45ACP because of the good mixture of size and capacity. I don’t own any Glocks in .45ACP and because of this gun and others, I probably never would.

It’s hard to draw too many conclusions from a gun that you have this little experience with, because time will only tell how it will hold up to continued use and carry. Overall, my impression of the M&P45C is good though. If the trigger was even slightly better, I would probably rate it as being very good. We’ll have to see what can be done to improve that.

UPDATE: Since the original writing of this blog article, an APEX sear has been installed. This improved the trigger considerably but it still needs a little more work in my opinion. 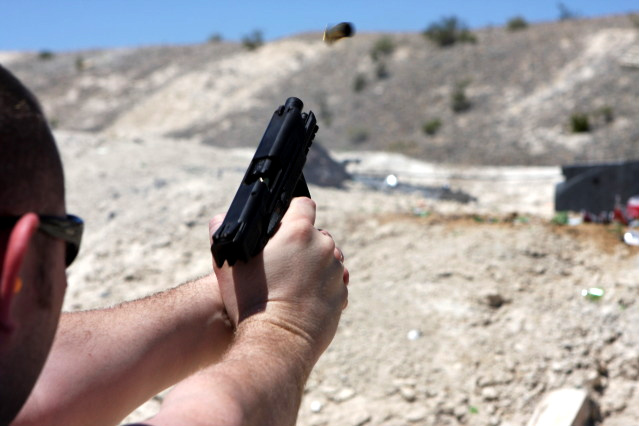