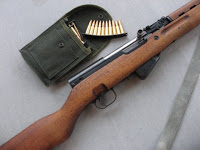 Without a doubt, I have long felt that the SKS is the best bang for the buck in the semi-auto rifle world.

They can commonly be found in the $200-400 range depending on the country of origin, model, and condition.

The SKS was designed in Russia by Sergei Simonov in 1945. It’s service life as the primary service rifle in Russia was short with the development and adoption of the AK-47, but the SKS has still seen considerable combat and is well proven. It was used along with the AK-47 by our enemies in the Korean and Vietnam conflicts. It is a design still seen around the world, although it’s use is often overshadowed by that of the AK.

We still see them being used by many militias, terror groups, and individuals in the Middle East and Africa.

There are a variety of different makes of SKS’s as Russia shared the design information freely with it’s allies during the cold war. Along with Russia, the SKS was produced by other countries such as Yugoslavia, Romania, E. Germany, China, Albania, Poland, Vietnam, and N. Korea.

Chambered in the same caliber as the AK-47 (7.62X39), many people mistakenly believe that the designs were related, but they actually have little in common outside of the caliber. The caliber was developed to be useful in the most common of combat ranges with small arms, under 300 meters.

Ammo is fairly inexpensive compared to many rifle calibers due to the constant flow of foreign ammo (primarily from Russia) and the use of cheaper materials (steel cases, bi-metal jackets, berdan primers).

The SKS utilizes a 10 round fixed magazine fed by stripper clips, although there are exceptions. The SKS-M and SKS-D models made by Norinco (Chinese) use detachable 20 and 30 round AK mags and function reliably. These are highly sought after SKS’s, and rightly so. 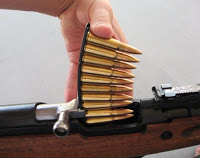 To load an sks, pull the bolt handle back on an empty chamber (it will lock back), place the 10 round stripper clip in place, push the rounds down into the magazine, take out the clip and release the bolt handle. The SKS has a free floating firing pin, so be careful to point the weapon in a safe direction in the very rare case of a “slamfire”.

There are also other aftermarket parts that many people use with their SKS’s that allow the usage 20 and 30 round “duckbill” magazines. These magazines tend to cause reliability issues and can affect C&R status of specific rifles as well, so they are not recommended.

There are a variety of other aftermaket SKS parts that companies sell, most of them undesirable. However, it hasn’t stopped many SKS buyers from trying to turn their SKS into an AK.

If you want an AK, get one. Your SKS will never be one. Many have tried, all have failed.

Norinco also made another highly sought after and desirable SKS design in their “paratrooper” model, which featured a 16″ barrel. These are great carbines!

Most SKS’s are chrome lined, with the exception of the Yugoslavian SKS’s. That is one of the biggest downsides to the Yugo’s in my opinion. However, the Yugo SKS’s are still good weapons. A well built, high-quality variant. Many of the Yugo’s also feature grenade launchers on the end as well. Unfortunately for us, civilians cannot really take advantage of that feature.

Many people see the grenade launcher on the end of the Yugoslavian SKS’s as a negative thing because of the excessive weight and uneccesary extra barrel length. They tend to be fairly common though these days in the USA.

The SKS is often seen as a good first semi auto rifle, inexpensive plinker, great trunk gun, or even a respectable back up rifle. They are easy to field strip, clean, and maintain.

An SKS will do 90% of what an AR-15 or an AK-47 will do, and for much less money. Anyone on a severely restricted budget could have a battle proven semi auto rifle for a couple hundred dollars.

A well trained rifleman with an SKS makes a formidable opponent to anyone who would do him harm.

Keep in mind that the quality of the SKS’s is much better than the lower end AK’s that tend to be closer to the SKS’s price range. You’re also more likely to get better accuracy from an SKS. The only AK that challenges the SKS’s value and accuracy is the Saiga.

*Since this writing, the SKS has dropped in terms of “value” as the supply of surplus SKS’s has dried up substantially. Still a good rifle, but if you are looking for the best value out there, the Saiga’s and the less expensive AK’s out there, such as the Yugo PAP’s are now the best value in the rifle world. They cost more than the SKS did at the time of this writing, and still might cost slightly higher even now. However, the AK’s are more versatile and allow for more options with calibers and plentiful detachable magazines.