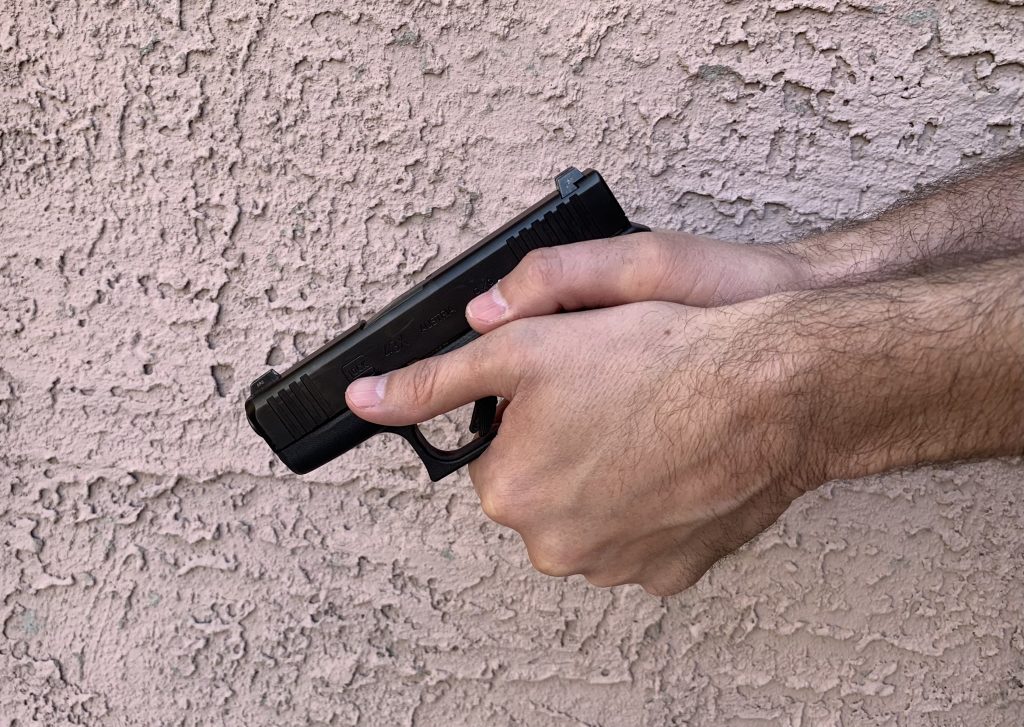 It’s no secret that shooting a handgun accurately is more difficult than shooting other types of firearms. There are a few reasons for this. For one, there’s less to hang on to when shooting a handgun. Additionally, the radius between the front and rear sight is shorter than with a rifle. This means that there’s a greater human error factor when aiming a handgun. Lastly, you don’t have that third locking point on the shoulder when shooting a long gun like you do with a butt stock.

Despite these challenges, shooting handguns accurately is definitely possible with practice! So, let’s talk about how to shoot better with pistols, specifically semiautomatic pistols.

How should I hold a handgun?

Grab the handgun as high up on the grip as you can. You want the web of the hand to be high enough that a ripple of flesh can be seen bunching up behind the backstrap of the grip on a semiautomatic pistol. A lower bore axis will give you more control and less movement from recoil.

Semiautomatics are designed to work best with this type of grip. It makes it easier for you to pull a trigger straight back for each shot. Failure to place your hand high enough up on the grip will often make you shoot consistently low and less accurately.

How should I stand while shooting a handgun?

There are a couple of different ways to stand. There is the weaver stance and isosceles. You can be an effective shooter with either stance, but you may also choose to be familiar with both of them for use under various scenarios.

Your feet should be about shoulder-width apart, with your shooting-side foot slightly behind your non-shooting side foot. The shooting arm should be fully extended while the support arm is just slightly bent and the elbow pointing downward. Bend your knees slightly to lower your center of gravity and help you absorb the recoil.

Some people consider Weaver to be the best for combat shooting as it lessens your profile, making you a smaller target. With that said, this more bladed stance also lines up more of your vital organs possibly making it more lethal if you get shot in the center of mass. However, it also makes it easier to shoot within more confined spaces.

The feet are hip-width apart, the belly button and shoulders pointed downrange, and the stance is balanced. Knees slightly bent, head is upright, and the end of the nose extends just beyond the tips of the toes. When the arms are fully extended, they form an isosceles triangle from above.

In this shooting stance, protective gear, such as hard or concealable body armor are directly in line of the target. Theoretically, this should maximize your protection from incoming fire.

Once you have the proper stance and grip of the firearm, the key to shooting accurately is sight alignment and trigger control.

Trigger control is how you pull the trigger. You want to press the trigger straight back without disturbing the alignment of your sights. This can be difficult, because as you increase pressure on the trigger, it becomes harder not to move the sights.

The goal is to keep the front sight centered in the rear sight while pressing the trigger straight back until the gun fires. This takes practice. A good way to start is by using a dry-fire practice.

Dry fire is when you practice shooting without ammunition. You can do this by making sure your gun is unloaded and there is no magazine inserted. Then, point the gun in a safe direction and pull the trigger while focusing on your front sight.

You can also use a snap cap, which is a dummy round that protects the firing pin from damage when dry-firing.

Trigger reset is something you should also be aware of. When you fire a shot, be careful not to jerk your finger off of the trigger. Doing so will create extra movement for the gun and make follow up shots slower and/or less accurate. Focus on a more fluid motion with your finger.

Once you have the basic principles of shooting a handgun down, it’s time to head to the range and start shooting with live ammunition. Start by shooting at a close range, about seven yards. As you get more comfortable shooting, you can move back to shooting at a longer distance.

When shooting, remember to focus on your front sight, press the trigger straight back, and follow through after the gun fires.

If you keep these things in mind, you’ll be well on your way to shooting more accurately with a handgun. Just remember, it takes practice to get good at anything in life. So don’t get discouraged if you don’t see results right away. Keep practicing and you’ll be shooting like a pro in no time.