The Saiga is made by Izhmash, the original AK-47 manufacturer in Russia, who still produces the real deal for the Russian military. They produce them in a variety of different calibers including (but not limited to) 5.56, 7.62×39, .308, and even shotgun calibers such as 12ga and 20ga (among others).

They are quality AK’s, some of the best on the market in my opinion, and very hard to beat at the prices they can be had at.

In order to qualify for importation, the Saiga AK is made in a “sporting” configuration without the signature pistol grip and to accept only 10 round magazines specifically designed for the Saiga. They even mark the 5.56 rifles in .223 to help pass them off as “sporting rifles” (some would say).

The basic AK design is still the same though, and the aforementioned differences can be overcome. Some companies will buy Saiga’s and do the work themselves and sell them as “Saiga Conversions” for an increased profit.

Individuals can buy them in the original configuration and either keep them that way or do the conversions on their own as well.

In the case of this particular Saiga, it was purchased for about $300 in the original configuration. The work was done later to convert it to legal status with a pistol grip.

Because of 922(r), the weapon must have less than 10 specific foreign parts, per the BATFE (in order to do the pistol grip conversion, add a flash hider, or use higher capacity mags). The changing out of certain parts so that the weapon consists of 10 or less foreign parts essentially makes the weapon a US made gun and therefore legal to own in the unsporting configuration.

Saiga rifles have 14 “foreign” parts in them, so changing out of at least 4 of these parts will get you within compliance.

Tapco sells a G2 trigger group and other parts necessary like a US made pistol grip and buttstock to do the conversion and be in compliance.

In order to convert the weapon to take regular 5.56 AK mags, the magazines needed to be altered and a bullet guide needed to be installed for them to feed correctly. You can also do a similar thing with the 7.62×39 versions.

The 30 round magazines used with this rifle were Bulgarian Waffle mags. The original 10 rounder was also altered in a similar manner in order to work with the converted rifle by filing down the front of the mag to be compatible with the newly installed feedramp. 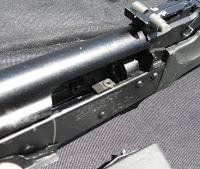 Feedramp installed on the Saiga 5.56

The bullet guides can be purchased from Dinzag Arms.

It took some amount of trouble shooting, but we ended up getting it to function perfectly.

The task to do the conversion work yourself may seem daunting to some. However, it is fairly easy. There is a lot of good info to be had out there for these kinds of projects from sites such as the Saiga-12 forum.

Disclaimer: I am not a lawyer and do not claim to be a certifiable source for information on laws regarding firearms. Always check the laws for yourself from a certified source to make sure that what you do is in compliance with the current laws in your part of the country. Some states, counties, and cities have their own restrictions you should be aware of and adhere to. I assume no responsibility for your actions.