Refinishing of a 24/47 Yugo Mauser

I’ve always had an appreciation for the Mauser design. I bought a Turkish Mauser from my oldest brother about 7-8 years ago and although it was fun to shoot, I hated the super long barrel (29″) which made it impractical for anything other than as a range plinker or a collectable.

So, when I saw an ad from Big 5 of 24/47 Yugo Mausers on sale for $99 I had to jump on it. These Mausers are known for their good quality and and have a much shorter barrel than my Turkish Mauser did. Also, I had a pretty good stash of 1947 dated corrosive Turkish ammo (bought back when surplus 8mm pricing was the closest centerfire rifle ammo to .22LR cost).

After an eternity at Big 5 taking care of the paper work (I guess that was the price to pay for the good price on the firearm) I got it home and began the cosmoline clean up. My method usually consists of the use of a heat gun (a blow dryer will also work) along with plenty of newspaper and paper towels to get the bulk of the cosmoline to “melt” off of the gun. Then a more thorough detailed stripping of the gun and soaking of parts in mineral spirits (this really cleans the cosmoline off good).

Removal of cosmoline can be painstaking to some, but I enjoyed the personal time to spend getting reacquainted with the design and making a close inspection of the overall condition of the firearm. It came with a pretty cool bayonet and some other knick knacks.

The bore was (and is) absolutely pristine. Blueing was in good shape, but the wood was extremely dark from the years of soaking in cosmoline. I wanted to clean it up and restore the wood to the more original color the rifle had 60-80 years ago. My younger brother bought one at around the same time and wanted to clean his up as well. So, we finally got around to refinishing our stocks. We started out by taking all of the metal parts off. Then we sprayed the stocks with a finish stripper, let them sit for several minutes and used steel wool in order to remove the finish.

After that, we washed the stocks off with water and let them dry. The next step was sanding the stocks, first with a rougher grit and then with a finer grit. Then, more washing and drying before we underwent another sanding before washing and drying again. We went through this process a few times. My stock revealed some dark spots and I was shocked to see how much lighter my brother’s stock wood was compared to mine underneath. The differences didn’t just go for the wood.

Upon further inspection, I noticed interesting differences in other parts of our guns such as the bolt handle and barrel band (among other things). Finally the stocks revealed what we felt was the “original” and natural colors, both considerably lighter than before. They were refinished in several coats of Tung Oil, allowing the finish to dry in between coatings. Below is how mine turned out.

I was pleased with the finished product. Total cost was somewhere around $35, and that was for both guns. Yes, it took time (which is money), but I enjoy the aspect of taking the time to do this kind of work on my guns. It gives me a sense of pride in the firearm and also gives me a greater respect for it.

The 24/47 Yugos are indeed very good quality. This is an incredible piece of history that is also fun and useful as well and at a price that is too good to be true. The only thing that I don’t really care for with this firearm is the straight bolt handle. I’d like to pick up a German K98 but they go for much more.

On a side note, I gave the Turkish Mauser back to my brother (for nothing) a few years back when I first got the Yugo. I had thought about selling it myself but just never did and he said he wanted it so I let him take it. It was actually in pretty good shape for a Turk and functioned perfectly well. My brother had refinished it prior to selling it to me and it looked just fine. In fact, it looked downright nice for a Turk. Unfortunately, he had a garage sale when he moved a few months later and decided to sell it without telling me. He let it go for something like $30. Very sad. I now wish I had kept it.

This only confirms my growing opinion that if you have a firearm that works reliably, do not sell it (or GIVE it away!). You will regret it. The only firearms I do not regret selling are the ones that do not function well. 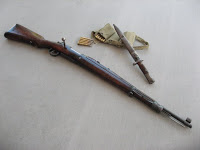