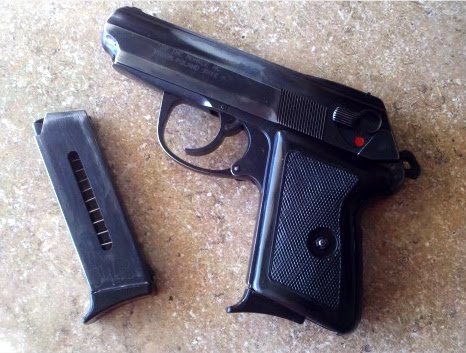 These little pistols are currently listed at Aimsurplus.com for $179.95. Being one who has had good luck in the past with two other 9×18 surplus pistols (Makarov and CZ-82), I decided to roll the dice on these, so I picked up two of them.

I have done some reading on them and was aware of what I might be getting myself into, to a degree.

A little background on these pistols. They were developed in the late 1950’s and put into service with the Polish Military in the 1960’s, replacing the Tokarev. Being chambered in 9×18, it is a blowback design.

Mine each came with two 6 round magazines, cleaning rod, and a cheap, unimpressive surplus holster. The internals had a decent coating of oil. The outside lacked excessive oil/grease/cosmoline often accompanying an older surplus firearm. The finish on them was ok, but pretty well worn near the muzzle (The above pic makes it look a little better than it is in reality). Mine were made in ’73 and ’76.

I was able to get out and shoot these today and it was certainly an interesting experience.

First off, the thing that caught me by surprise was the recoil. Neither of my other 9×18 pistols exhibit quite this much recoil. So that was the first thing that jumped out at me.

I didn’t find myself being particularly accurate with it either. The sights are not very good, although I am not sure if this is the only reason I was not terribly accurate with it, at this point anyways… I reserve the right to change my mind on this matter in the future, but my first outing wasn’t encouraging.

Shooting it in double action is almost impossible with one finger, it was quite ridiculous how heavy the pull is (reportedly 25lbs+). Single action was the only way to fire effectively.

Giving credit where credit is due, they both fired 50 rounds each without a hiccup.

I also found the grip to be fairly small, even for me, and I don’t have the largest hands. My entire hand barely manages to hang on to the grip, with zero room to spare.

It is an extremely thin design which leads me to believe it has potential to be a decent CCW gun. It also had a loaded chamber indicator in the rear, above the hammer, which I kind of like.

Similarities with the Makarov

Like the Makarov, it has a slide mounted thumb safety (although up is fire and down is safe, the opposite of the Makarov) and it decocks the hammer when the hammer is back and the weapon is placed on safe.

It field strips almost exactly the same was as a Makarov. Remove the mag, check the chamber, pop the trigger guard down, pull back on the slide and lift up on the rear.

Another thing making it similar to the Makarov was the heel mounted magazine release. However, it is much harder to use this magazine release because it is recessed a little bit.

This firearm lacks a slide stop/release. The only way I know of locking the slide back is on an empty mag. Also, you must slingshot the slide to chamber a round, there is no other way.

Overall, I am not too impressed with this pistol, even for the money. I’ve read that you can lighten the double action trigger pull by adding a weaker spring and help reduce the recoil with the addition of a stronger recoil spring. These are changes I plan on adding to see if it can be made into a quality shooter and/or CCW gun. However, it is my opinion that in stock form, these are simply not great guns. There, I said it. I look forward to seeing what these changes will do to make it a better gun.

Another one of my brother’s got a couple of them and shot his seperately and seemed to have a more positive outlook of the P-64 than I did when I spoke to him.

Obviously it is a combat proven handgun though, meaning it can be accurate enough and it is certainly reliable, at least in my limited experience, not to mention it has a service record to back that up. That said, I think it is only natural that one would want to compare them to the Makarov and others like that. Maybe that is why I wasnt so impressed, because I am comparing it to my Makarov and CZ-82.

To read my review on the Makarov, CLICK HERE.