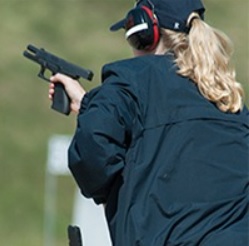 Professionals have spent years collecting data from gun battles (often referred to by LE as “street data”) and from testing in labs. No two gun battles are exactly alike. Ask any experienced LEO or combat veteran.

In any fight engaged in by lawful citizens or LE, your goal should simply be to eliminate the threat as quickly as possible. This does not necessarily mean killing the attacker, although it just so happens that the most effective means of eliminating the threat are the same as what would kill a person. The difference is, if the threat is eliminated and the attacker is still alive, you have a legal and moral responsibility to do all you can to save them at that point (so long as it is not at your own peril).

Eliminating a threat can be a very tricky task. Your heart rate will increase and you will be under an incredible amount of stress. In situations like this, hands get shaky and sweaty, you operate at the level you have been trained. Training needs to be second nature. If you have trained at a higher level than your enemy, you will have the advantage when the bullets start flying.

However, this advantage does not guarantee victory. There are still many factors to consider, and many which simply cannot be accounted for.

“Physiologically, a determined adversary can be stopped reliably and immediately only by a shot that disrupts the brain or upper spinal cord. Failing a hit to the central nervous system, massive bleeding from holes in the heart or major blood vessels of the torso causing circulatory collapse is the only other way to force incapacitation upon an adversary and this takes time. For example, there is sufficient oxygen within the brain to support full, voluntary action for 10-15 seconds after the heart has been destroyed.” (Urey W. Patrick, FBI Firearms Training Institute).

There are countless examples of military and LE officers in firefights where they delivered multiple rounds on target with proven calibers and the threat was not neutralized.

In this FBI article on the Myth of One-Shot Drops, a few specific gunfights are used as an example of LEO’s experienced exactly what I am talking about.

“In the authors’ ongoing study of violence against law enforcement officers, they have examined several cases where officers used large-caliber hand guns with limited effect displayed by the offenders. In one case, the subject attacked the officer with a knife. The officer shot the individual four times in the chest; then, his weapon malfunctioned. The offender continued to walk toward the officer. After the officer cleared his weapon, he fired again and struck the subject in the chest. Only then did the offender drop the knife. This individual was hit five times with 230-grain, .45-caliber hollow-point ammunition and never fell to the ground. The offender later stated, “The wounds felt like bee stings.”

In another case, officers fired six .40-caliber, hollow-point rounds at a subject who pointed a gun at them. Each of the six rounds hit the individual with no visible effect. The seventh round severed his spinal cord, and the offender fell to the ground, dropping his weapon. This entire firefight was captured by several officers’ in-car video cameras.

In a final case, the subject shot the victim officer in the chest with a handgun and fled. The officer, wearing a bullet-resistant vest, returned gunfire. The officer’s partner observed the incident and also fired at the offender. Subsequent investigation determined that the individual was hit 13 times and, yet, ran several blocks to a gang member’s house. He later said, “I was so scared by all those shots; it sounded like the Fourth of July.” Again, according to the subject, his wounds “only started to hurt when I woke up in the hospital.” The officers had used 9-millimeter, department-issued ammunition. The surviving officers reported that they felt vulnerable.”

Another good example is USMC Sgt Brad Kasal who during the battle in Fallujah, Iraq was shot 7 times by 7.62×39 rounds at close range and took grenade fragments saving several fellow Marines and surviving the attack. 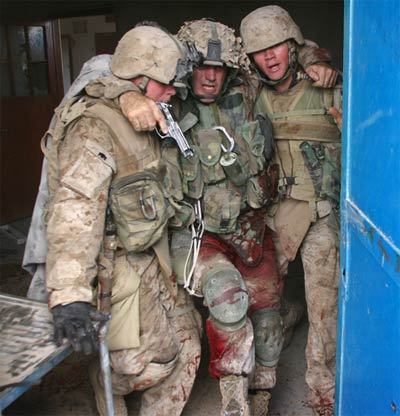 What these real life events demonstrate to us is that the human machine can be quite difficult to kill. Ultimately, they tell us one simple thing. You should not stop shooting until the threat is eliminated. It may only take one shot, but you shouldn’t count on it. Your life may depend on your ability to shoot not only accurately, but rapidly.

The 1986 Miami Shootout was the catalyst for much change in the FBI. For those not familiar with the event, it was a shootout between eight FBI agents and two bank robbers who were resisting arrest. You can read more about the details here.

In short, it led to the death of two agents and left five others wounded. The two gunmen proved difficult to stop with one taking six shots and another taking 12 before succumbing to their wounds. The shots that ended the lives of both gunmen (and ultimately, the fight) were shots that hit the spinal cord. Toxicology results showed no drugs or alcohol in the system of either gunmen.

The aftermath resulted in an increased amount of scrutiny and testing regarding tactics, training, bullet design, and calibers used by agents. At the time of the shootout, the agents involved carried 9mm S&W pistols, .357mag and .38sp revolvers (all of which were loaded with .38 Special +P ammo), and a Remington 870 12ga (loaded with 00 Buck). These were the common approved weapons for agents to carry.

The gunmen were carrying a couple of .357mag revolvers, a S&W M3000 12ga (loaded with #6), and a Ruger Mini-14 .223. The latter weapon doing the bulk of the damage and being the weapon that was used to kill the two agents and caused the injuries to at least 4 of the other agents.

It is interesting to note that throughout the fight, despite injuries, some of which were likely mortal wounds, both sides continued to fight.

The FBI moved towards larger, more powerful calibers as a result of the shootout. The 10mm cartridge was developed, as was the .40S&W (basically a 10mm “short”) which is now the standard round issued by the FBI. They preferred the 10mm, but it proved to have a bit too much recoil for most agents, particularly women. Therefore they went with the .40S&W.

They also went away from revolvers and got into autos exclusively. S&W simply couldn’t make an auto that fit the bill for them, and although they had worked with S&W for years and wanted to stay with an American gun company, they looked elsewhere, first going with the Sig Sauer and eventually going with the Glock. They seem to be sold on the Glock. Only a few Sig holdouts remain that have been allowed to be “grandfathered in” and SWAT/HRT agents that can and often do carry .45ACP 1911’s.

They began issuing more MP5’s (in 9mm and 10mm) and is even now issuing an AR15 made by RRA for the DEA and FBI.

The Bureau even devised a set of standards for testing ammo effectiveness, a standard which is becoming the standard for almost all agencies. It requires a round to pass through 12 inches of ballistic gelatin reliably and consistently as a minimum standard with 18 inches of penetration being ideal.

When searching for a quality carry or self defense round, it may be wise to consider this standard.

The average human torso measures 9 inches front to back, but take into affect bones and less than ideal angles and you need greater penetration to get the job done.

The two most important criteria in bullet design (as far as terminal effectiveness is concerned) are penetration and expansion (or, in the case of some rifle rounds, fragmentation). Penetration is the most critical of the two. You never want to sacrifice adequate penetration for the sake of expansion or fragmentation.

Expansion and fragmentation will both increase blood loss and hasten the incapacitation of your attacker.

Shot placement is key. Practice rapid well placed shots and do not stop until the threat is eliminated. Select good ammo that is reliable, proven, and meets the minimum standards set out by experts consistently.

Bigger bullets create larger wounds. Rifles can be fired faster and more accurately (especially at distances). Rifle rounds (even the intermediate cartridges) are more devastating and destructive than pistol rounds.

Whatever tool you choose to do the job, train with it.