M855 ammunition: Everything you wanted to know 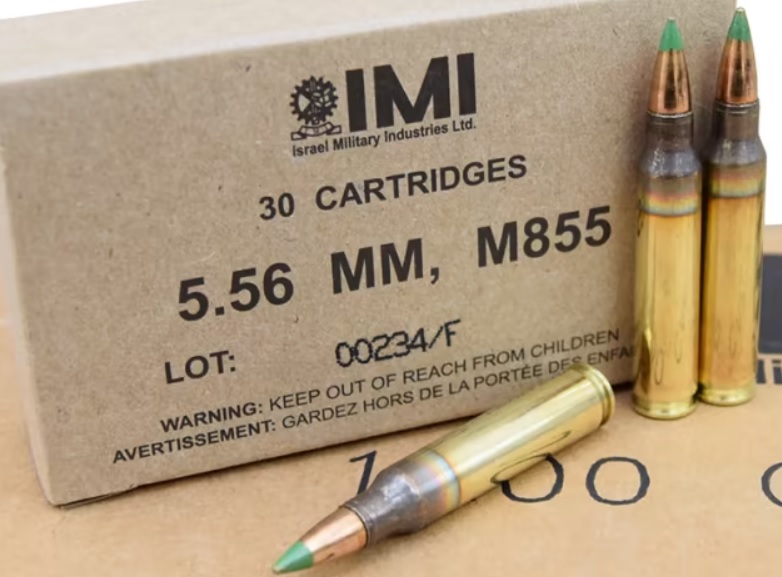 M855 ammunition, also known as “green tip” ammo, is a type of brass-cased, lead/steel-core hybrid rifle ammunition in 5.56x45mm NATO. It is a 62 grain bullet with a steel penetrator tip and a full metal jacket (made of copper). The M855 has been the standard issue rifle ammunition for the U.S. Military since 1983.

No. While the M855 does have a steel penetrator as a part of its construction, it is not considered armor piercing (AP). AP ammunition has an all steel core. M855 utilizes the SS109 bullet which has a lead core along with a steel penetrator core in the front.

The steel penetrator in the SS109 does help it penetrate barriers easier than most FMJ such as M193.

The SS109 is a 62 grain FMJ bullet with a steel penetrator and a lead core. It was developed by FN.

Before the adoption of M855 ammunition in the US military, M16 barrels had a 1/14 or 1/12 twist barrel. The SS109 is longer than the 55 grain M193 bullet and requires a faster twist rate in order to stabilize it properly. SS109 bullets fired from 1/12 twist barrels failed to fly straight.

Prior to M855, the standard military rifle ammunition was M193. M193 looks very similar to M855, but does not have a steel penetrator. It was designed to replace M193 and the green tip is simply for identification purposes. There were still older M16A1’s in US military inventories and they needed to stick with M193.

While it is generally safe to fire M855 in a 1/12 or 1/14 twist barrel, accuracy will suffer tremendously. Combat manuals warn that it should only be used in 1/12 twist barrels in an “emergency”.

Most other countries do not designate their SS109 5.56 NATO ammunition with a green tip.

Why did the US military switch to M855?

It proved to be able to penetrate a steel helmet at 600 meters better than M193. It was specifically designed for use with the squad automatic weapon (SAW). The SAW was being adopted around the time that revisions were being made to the M16A1 for the M16A2.

Yes and no. While it is not technically an M855, it is almost identical to it in nearly every way. Especially if it is being produced by the Lake City ammunition plant. This ammo is loaded to 5.56 NATO spec and is generally much hotter than typical .223 Remington.

Some people claim that XM855 rounds are factory seconds, but it is more likely that they are just production overrun ammo or specifically made for the civilian market. They just don’t make it to final inspection to be counted as M855.

If you are buying from a manufacturer that does not make ammunition for the US military, all bets are off. Though much of it is likely close to M855 spec and likely uses a SS109 type bullet. However, it may not offer the exact same ballistics and terminal performance.

How accurate is M855 ammunition?

It is generally good for practicing or even stockpiling for SHTF. However, it isn’t a match grade bullet.

It has a decent application for self defense since it is accurate enough and it is capable of fragmenting if it is traveling fast enough.

Is the M855 a good bullet for deer hunting?

So long as it is going fast enough, the SS109 bullet is known to fragment when it hits soft tissue. Not all 5.56/.223 ammunition is capable of fragmenting.

The ability of M855 to fragment makes it very effective at shorter ranges since it is more likely to damage vital organs with it’s wound channel. However, at longer ranges, it is not quite as effective.

Fragmentation can occur at lower speeds than 2700 feet per second as well, but it is less likely to occur and less extreme as well.

Fragmentation is a delicate process and can be affected by multiple factors. They include:

How does bullet fragmentation work?

The SS109 bullet can “tumble” when it hits soft tissue. If it is traveling fast enough when this occurs, the bullet can literally rip itself apart from the force. This often happens along the cannelure, which is a weak spot on the bullet.

Barrel length is going to determine how much distance you are able to be from a target and expect reliable fragmentation. More and more people are going to shorter barrels with their AR-15’s and battle carbines. So, keep in mind that you’re limiting the range of fragmentation when you do this.

The M855 bullet was truly designed for a 20″ barrel and it doesn’t get much better performance out of a longer barrel than that.

The following distances are about how far you can expect your M855 spec ammunition to be capable of reliable fragmentation:

Below that barrel length, you are not producing enough muzzle velocity to get much fragmentation, if any. However, bullets can fragment to a much smaller degree, and much less reliably as low as 2500 feet per second.

These velocities are not exact, they are roughly rounded to the nearest hundredth since variations in muzzle velocity are often different from round to round, by 1-40 feet per second in many instances.