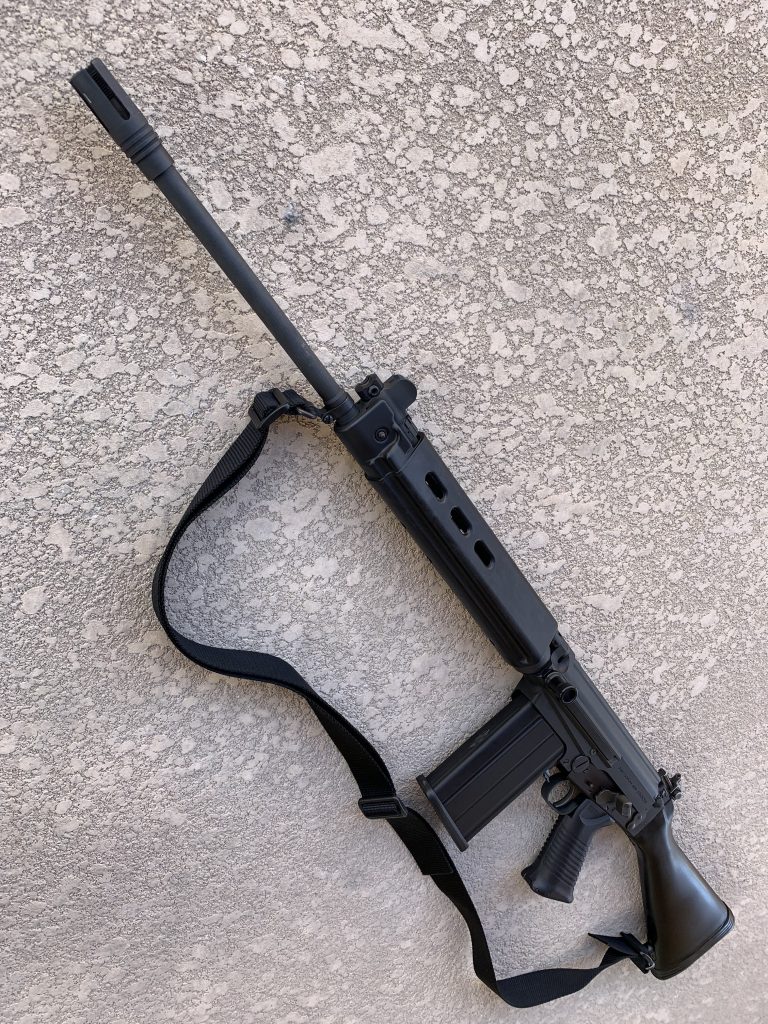 I bought this rifle in 2016 from Aimsurplus for $999.95. I bought it specifically in order to compete in our local ViMSAR (Vintage Military Semi Auto Rifle) match. We regularly shoot out to 100, 200, 300, and even 400 yards with vintage style rifles in the match.

It’s a great way to spend a Saturday morning in Las Vegas.

My DSA SA58 FAL is a 21″ model with a 4 prong flash hider. I did add a few modifications to the rifle as it came to me. I added the SAW grip, sling, and extended safety selector. This FAL came with a fixed rear sight, so I also purchased and installed an adjustable rear sight from Apex. It’s definitely a used part, but I feel it was an important upgrade for this rifle and it’s intended purpose.

Up to this point, I had been bringing an SKS and I wanted something that would shoot a little flatter and offered better iron sights. I’m not a huge fan of the 21″ barrel, but since I got it specifically for competing in a match, I felt that the 21″ barrel would take full advantage of the cartridge. If I hadn’t bought it for matches, I would have gotten the 18″ model.

My very first outing with the rifle was not a pleasant one. We went out to the desert to sight it in and the very first round resulted in a case head separation.

The case was completely stuck in the chamber of the rifle and the magazine was completely disassembled. I couldn’t remove the case on my own and ended up taking it to a gunsmith to get the case removed.

The ammo used was Tula, and I have had issues with Tula in the past, but nothing like this. 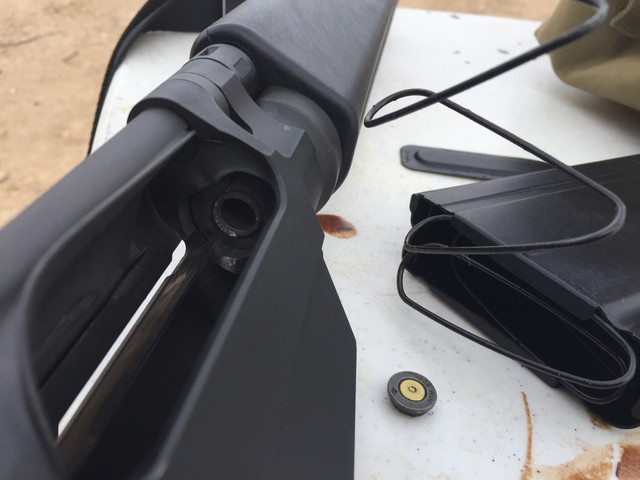 In an email with DSA, the rep stated to me: “I would highly recommend against using steel cased ammo like Tula in the FAL rifles. They were not designed for use with it and can cause failures like the one you have just experienced.”

So, we adjusted the gas system to work fine with those various rounds as I would be using them at matches in the future. Got the rifle sighted in and was ready for matches.

The first few matches went great with the same ammo.

Then, I forgot to pack as much Monarch (steel case .308) as normal but still had some Tula hanging around in my range bag during a match. However, I have shot several hundred rounds at this point and figured the gun probably just needed to be broken in and have the gas system adjusted properly. So, about halfway through a match, I fired my 2nd round of Tula out of the rifle, ever.

Wanna guess what happened next? Yep, the same thing that happened the first time I fired a round of Tula out of this rifle.

OK, so I am an idiot. I fully admit as much, but I finally learned the last lesson I needed with regard to Tula. So, I sold off the remaining stockpile of Tula .308 that I had after that incident and vowed to never buy Tula again.

I’ve shot this rifle many other times since then and it has never given me a problem with any other type of .308 or 7.62×51 NATO.

I’m happy with the rifle in spite of the trouble and frankly only blame Tula for the problems.

My brother has the same rifle (although his shipped with a brake instead of a flash hider for some reason). His has worked very well for him with a variety of ammo as well (including steel case), though I don’t think he has ever tried Tula, and I don’t think he ever will be.

Compared to many other FALs, it is noticeably lighter since the lower is made out of anodized aluminum.