What is the difference Between the AK-47 and SKS 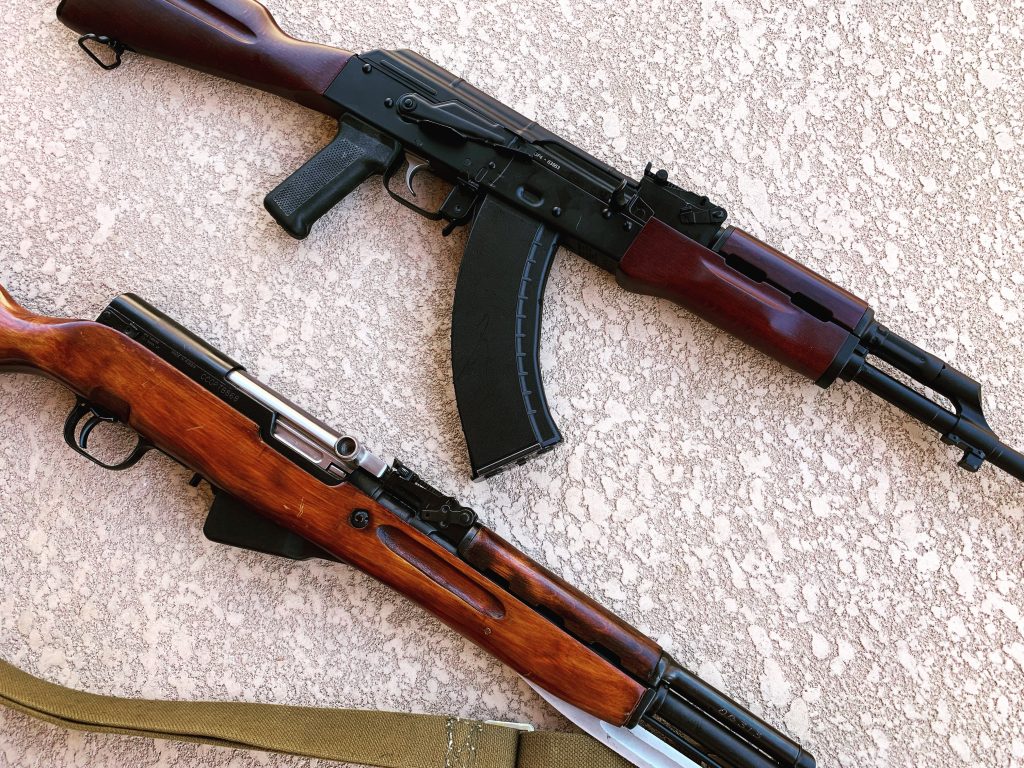 The AK-47 and the SKS are both battle carbines that have been widely used all over the world. They are both Russian made, and they were both designed by famous gun designers. The AK-47 was designed by Mikhail T Kalashnikov, and the SKS was designed by Sergei Gavrilovich Simonov. The SKS was actually the first to be designed, in 1945, while the AK-47 came later in 1947.

What are the similarities of the AK-47 and the SKS?

There are some similarities between the AK-47 and the SKS. Both rifles were designed in Russia and have gained a reputation for reliability. They are both gas operated, meaning that they use the expanding gasses from the cartridge to power the action of the gun. Both weapons were designed to shoot the 7.62×39 cartridge as well. They are also both capable of being fired in semi-auto. However, that’s just about where the similarities end.

Because of some of these similarities, including a similar looking forend, many people mistakenly believe the SKS is some sort of AK variant. Or, that the AK was based on the SKS design. That couldn’t be further from the truth.

What are the differences between the AK-47 and the SKS?

So, what are the main differences between these two rifles? Well, there are many. For starters, while both are capable of semiautomatic fire, the AK-47 is also capable of full auto. This means that the AK-47 can fire more rounds per minute than the SKS.

The AK-47 also has a detachable magazine, while the SKS has a fixed 10-round magazine. This means that you can quickly and easily change the magazine on an AK-47. However, you have to use stripper clips or load the rifle one round at a time with the SKS.

Most SKS models lack a muzzle device. Though the Yugoslavian SKS does have a grenade launcher attachment. While the original AK-47 did not have a muzzle attachment, most of the newer iterations of the AK do. These models include the AKM, AK-74, AKS-74U AK-12, and more. Most of them have a brake of some sort to help mitigate felt recoil and muzzle rise.

The AK receiver is generally made from stamped sheet metal. By comparison, the SKS receiver is made from milled steel. You might think that makes the SKS more durable, and it may be, though probably not as much as you might think. Both guns are known for being robust and extremely durable.

The bolts on each rifle are completely different as are the trigger and safety.

Finally, the SKS is generally considered to be more accurate than the AK-47. Part of the reason for this is that the SKS has better barrel harmonics. The SKS has a 20″ barrel (which is usually heavier or thicker), while the AKM and variants typically have a 16″ barrel. The extra length on the SKS’s barrel gives it slightly better velocity as well.

As you can see, there are quite a few differences between the AK-47 and the SKS. So, which is the better rifle? Well, that really depends on your needs and preferences. If you want a more compact rifle with more capacity and more firepower, then the AK-47 might be the better option. If you want a more accurate rifle, then the SKS might be the better choice. Ultimately, it’s up to you to decide which one is best for your needs.

Lastly, it is not advisable to get an SKS and try to make it into an AK. Both rifles are really good in their own right, but they are not meant to do the same thing or work the same way. Many people have purchased an SKS and tried to mod it to be more like an AK-47. In the end, it doesn’t work well like that. You often end up with an uglier, less reliable Frankenstein rifle. If you want an AK, I’d recommend you get an AK. It will work better for what you intended, and you will not ruin a classic rifle that is no longer being manufactured.