I have had my eye on a CZ-82 pistol for some time now. Owning a Makarov and having plenty of 9×18 ammo already, the CZ-82 appealed to me very much. I am not in love with the round, it is a little on the weak side, but I do believe it is adequate.

I do like it better than the .380 (which they make in a model known as the CZ-83). They have been on the market for a few years, but it is believed that the last of these have mostly been imported. Featuring a double stack high capacity 12 round magazine in a similar size to the Makarov was very enticing as well.

They were certainly priced right, at $229 and reviews on them around the web were very favorable.

I convinced my brothers to get in on them as well, and even persuaded one of my brothers girlfriends to get one (it would be her first handgun). We ordered from AIM and paid an additional $10 for handpicked. Not sure if it is worth it but I wanted to feel like I got the nicest one and considering the price in the very first place, I wasn’t bothered too much.

They came in a few weeks later and after cleaning off a light coating of oil/grease we took them out to shoot them. They functioned well, I only had 1 failure in 100 rounds and I am convinced it was simply because we had not been thorough enough in our cleaning. Accuracy was adequate.

First impression – comparing it with the Makarov

It definitely looked used but not abused. Mine was made in 1986 (the year is stamped onto the firearm). It came with a pretty decent OWB black leather holster with a thumb break and two mags.

CZ-82 with the leather holster it came with.

It only seems fair to compare this gun against the venerable Makarov, considering they were designed in Czechoslovakia after pressure from the Soviet Union to adopt the 9×18 round as the standard handgun caliber. Not wanting to adopt the Makarov, the Czech’s designed this weapon.

I would say they made some obvious improvements. Both have chrome lined fixed barrels. The sights on the CZ-82 are much better and the trigger is pretty smooth. I prefer being able to carry cocked and locked with the CZ-82, as opposed to the Makarov which decocks when you flip the safety on. The polygonal rifling on the CZ-82 makes it look like there is no rifling, but it actually increases velocity slightly.

The gun also feels much better in my hands than the Makarov, just the grip, etc. The magazine release and safety are both ambidextrous, and the placement of the mag release is in the more traditional spot but because it is ambidextrous, it can be manipulated with the thumb or the trigger finger (on the opposite side).

If you are left handed, the CZ-82 will be a rare exception to what you are likely used to dealing with. As an example, I convinced a left handed brother in law to buy a Makarov quite a while back. Recently, I showed him my CZ-82 and he was pleasantly surprised by how lefty friendly it was for him.

He promptly went out and acquired two CZ-82’s. I think he plans to sell the Makarov. The short of it is, if you are a lefty, the CZ-82 is easily the better of the two.

The downsides to it vs. a Makarov are that it is wider (in the grip, not the slide, because of the double stack magazine) making it slightly harder to conceal, but not too bad. Recoil also seemed a little sharper (however, I have a stronger recoil spring in my Makarov so that may be why the recoil is not as bad in it). The Makarov also has less parts, therefore making it theoretically more reliable.

The CZ-82 is known for having a lousy, painted on finish that chips off. Mine wasn’t too bad though, but still not as nice a finish as my Makarov. I had fully expected that I would need to Gun Kote this pistol but the finish on mine was good enough that I think I will just leave it be for now.

Overall, I still believe the value of this gun is very high. These are combat quality handguns at great prices and they will not last at that price if they are even still available. I have better handguns, although they are much more expensive to buy.

I think of this gun as a quality shooter, backup gun, a glove box gun, or even a loaner (for very good friends and relatives). It would make a very good CCW gun as well, one of it’s greatest attributes in my opinion. Read more about guns chambered in 9×18, such as the Polish P-64. 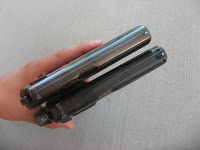