Civilians in Ukraine with guns 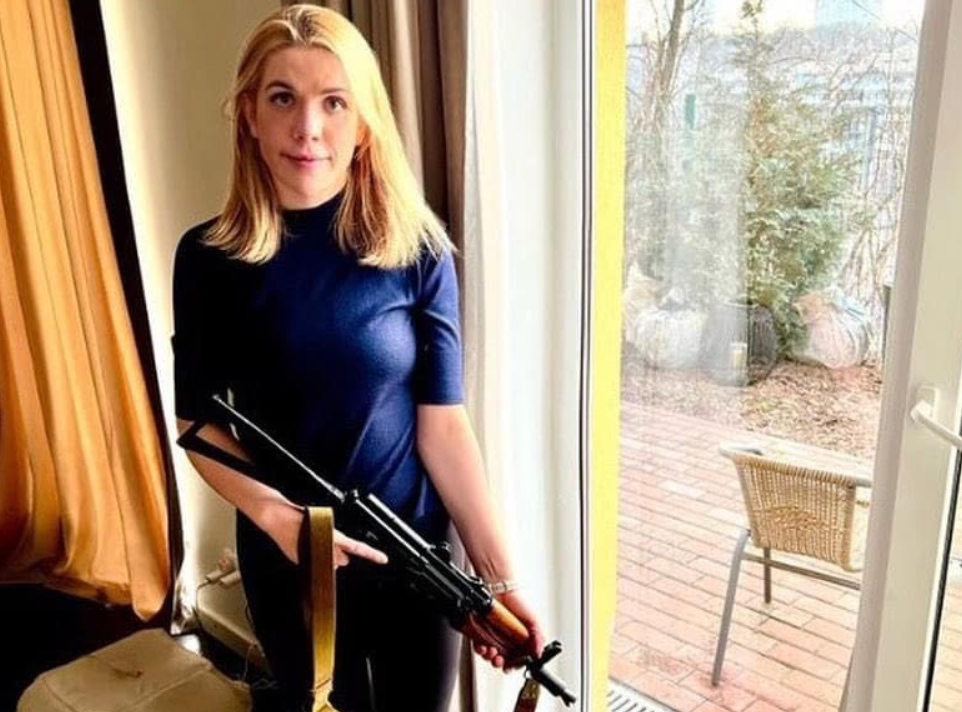 Civilians in Ukraine with guns, starting with the picture above.

Kira Rudik, a Ukrainian member of parliament, tweeted this picture, February 25, 2022, and said:

“I learn to use #Kalashnikov and prepare to bear arms. It sounds surreal as just a few days ago it would never come to my mind. Our #women will protect our soil the same way as our #men. Go #Ukraine!”

Here are some pictures of firearms that people claimed to have been given by the government in Ukraine. They include an AKS-74u, AKM, and AK-74. 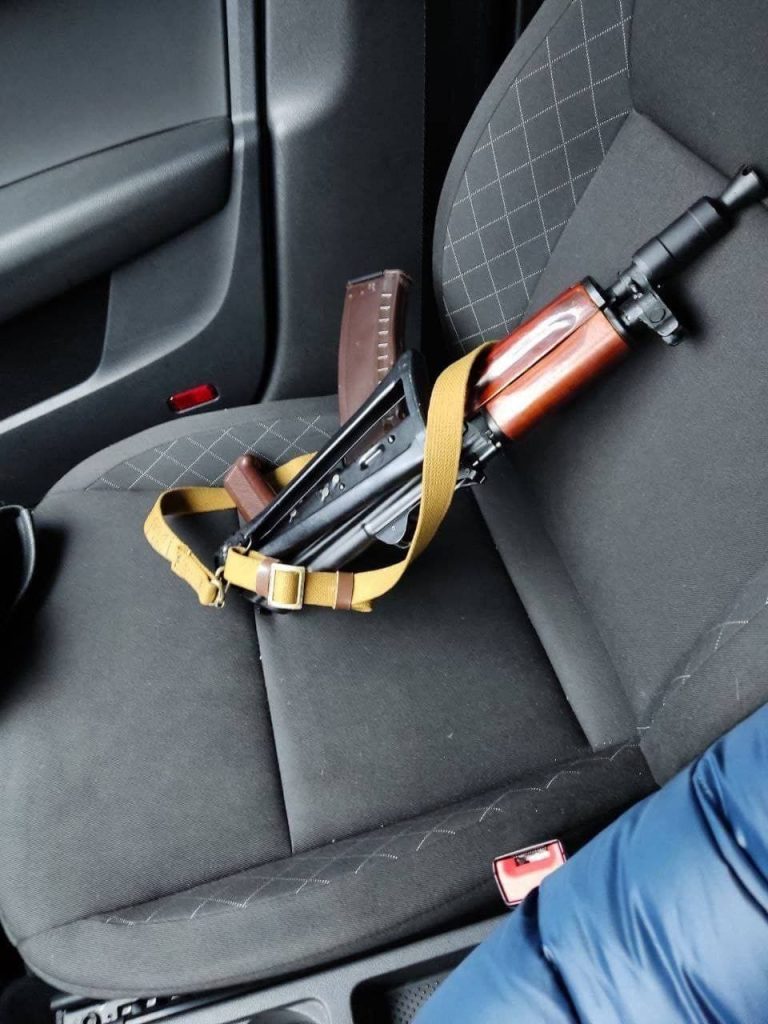 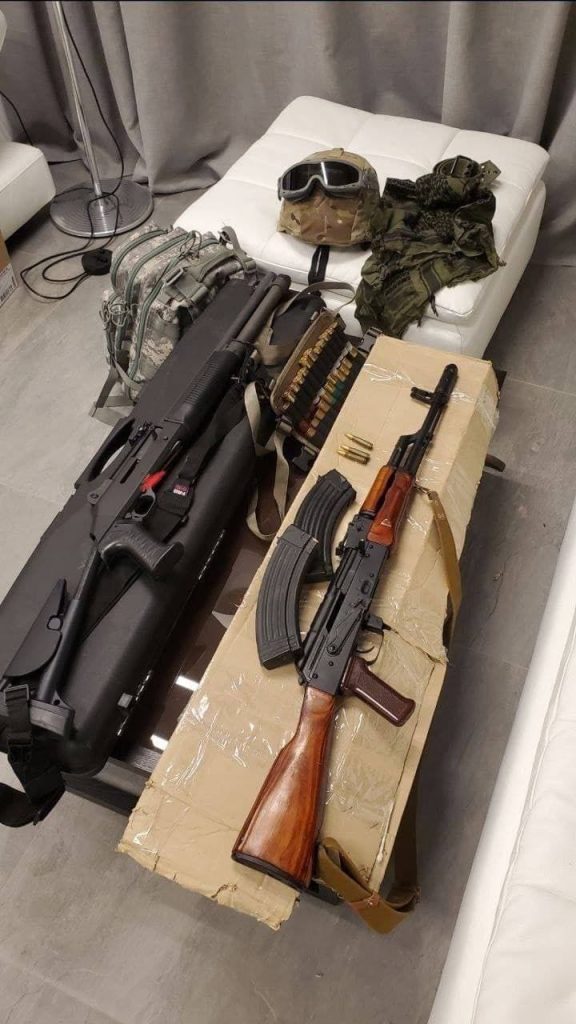 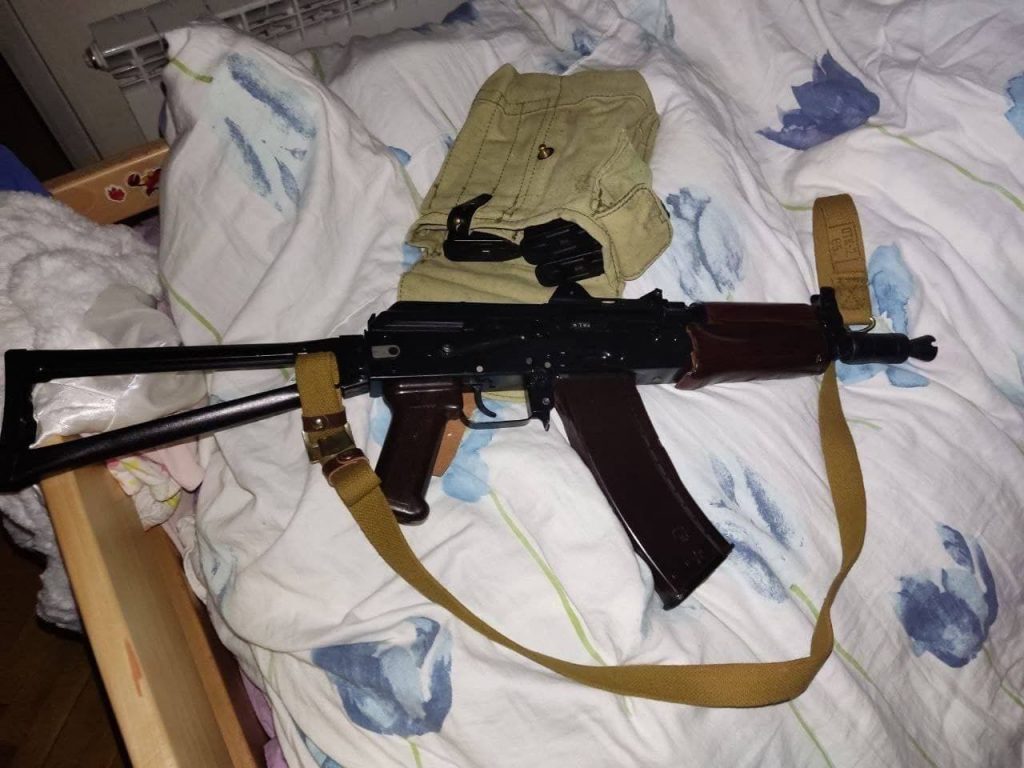 Additionally, these are some weapons that appear to have been privately owned (likely registered) already. They include a Remington 870 and a Mauser-C-96. 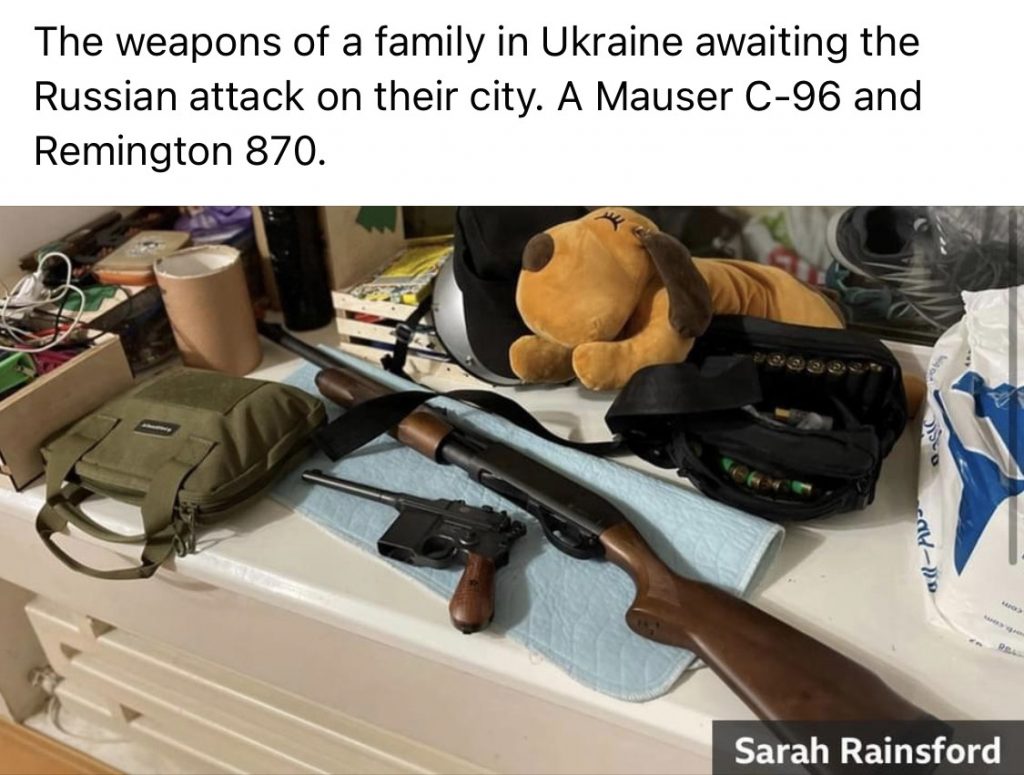 These are the typical guns at a gun store in Ukraine. Most appear to be fairly antiquated and not suited very well for homeland defense. 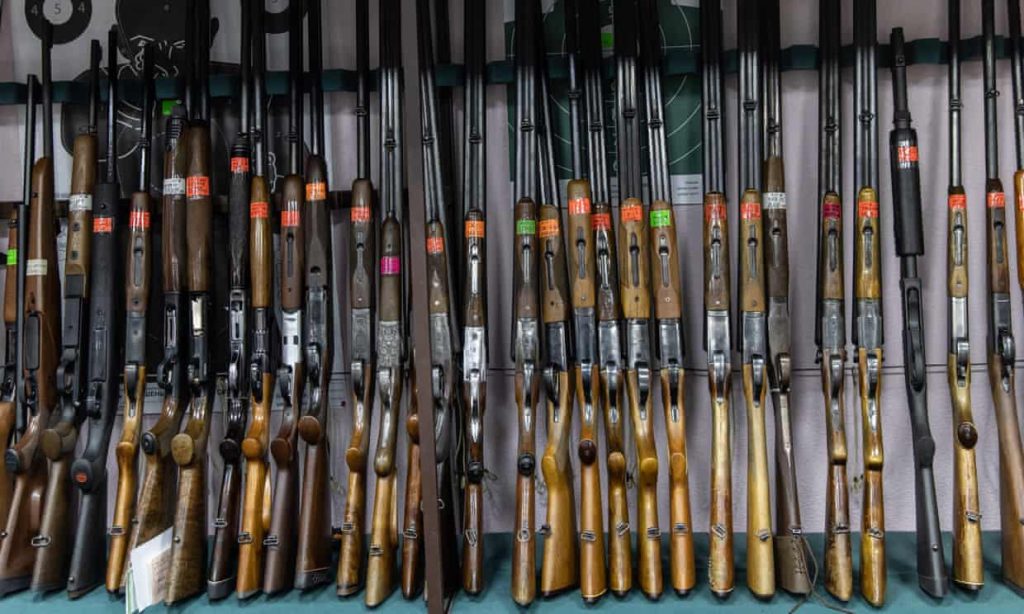 Here, a civilian defense force prepares to defend their city. Men are armed with AKM’s and a Dragonuv SVD. Possibly an RPK as well. 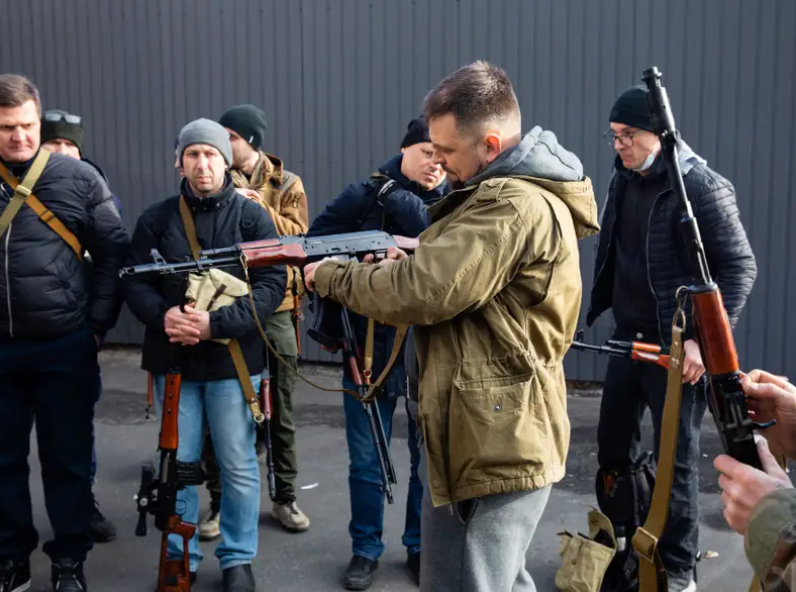 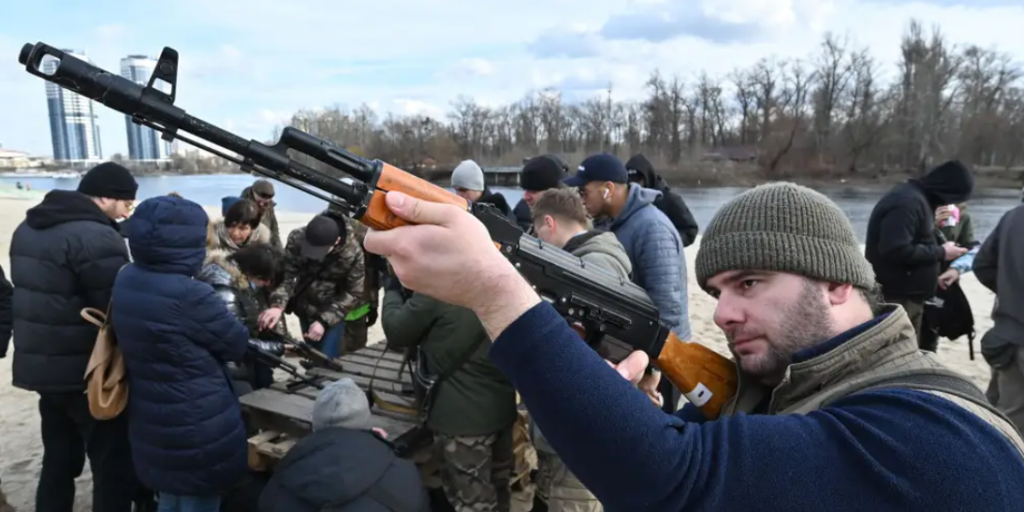 More civilians receive weapons and training in preparation for a Russian invasion. 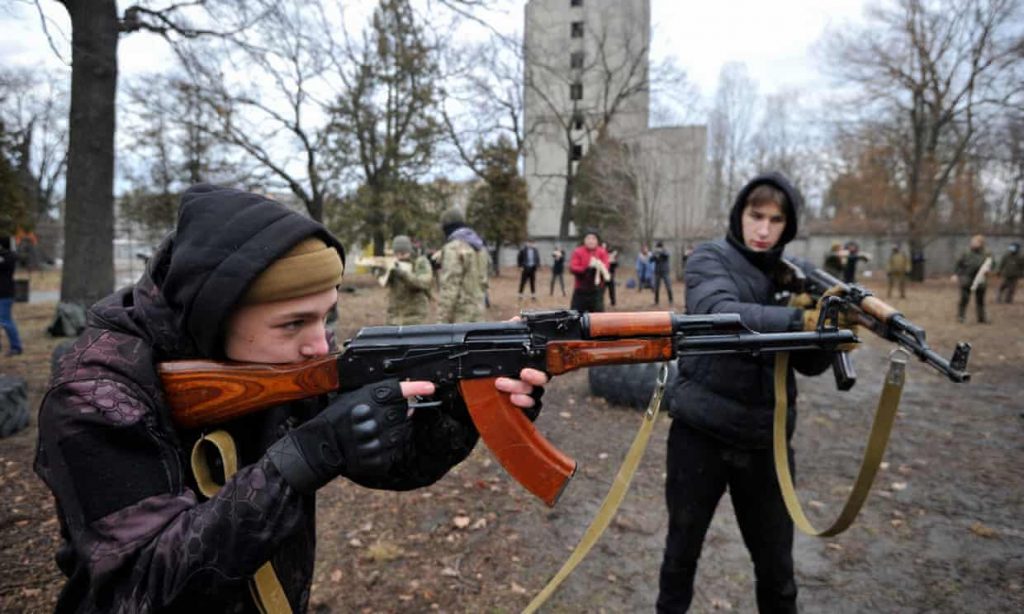 Another video on twitter shows civilians picking up weapons out of crates.

In Kyiv’s Obolon, firearms are delivered to anyone willing pic.twitter.com/UbHgBQNZJu

The people of Ukraine are getting a lesson on the value of an armed citizenry. In this blog post we take a look at civilians in Ukraine with guns. Additionally, we talk about how we got to where we are, and where they should have been instead.

Ukraine is a country of about 44 million people. As of 2018, there were 892,854 registered guns in the country. So, at most, 2% of the population could be considered gun owners. The number is probably much lower considering many of those guns are owned by more than one per person.

Some background on the war with Russia

Ukraine has been at war with Russia near their border for about 8 years. Ukraine had broken off from the Soviet Union back in 1991 and gained their independence as a sovereign nation. They inherited nukes and a decent stockpile of weapons and armament leftover from the USSR.

However, in 1996, Ukraine gave up its nuclear arsenal in exchange for security guarantees made by Russia, the United States, and others. This would prove to be an ominous parallel foreshadowing of what can happen when a citizenry gives up it’s firearms.

Fast forward to February 2022. The two countries have been fighting in eastern part of Ukraine for several years. The Russians started moving more and more troops along the border. The build up of troops was making an invasion appear more and more imminent.

Sensing the escalation of the war and a possible invasion, Ukraine parliament made several changes to their laws as a result. A vote was held and would pass on February 23, 2022. It loosened their gun laws to make it easier to obtain firearms and carry them in public.

“In Ukraine, large amounts of ammo is being purchased by civilians, police say.
10,000 firearms items have been registered in February alone. In general, the country has over 700,000 legal gun owners.”

Feeling the desperation of an imminent invasion, 3 days later, they would take it even further. President Volodymyr Zelensky tweeted,

“We will give weapons to anyone who wants to defend the country. Be ready to support Ukraine in the squares of our cities.”

It was reported that they gave out 18,000 firearms within a few days.

The Russian invasion is on in Ukraine

Now that the war has really ramped up, Ukrainian civilians are caught up in the battle. Not just as bystanders, but Russian troops are reportedly targeting civilians as well. We are just beginning to see how important it is that there are civilians in Ukraine with guns.

I can’t help but feel bad that the people in Ukraine didn’t already have easier access to firearms. Although they tried to make adjustments as war escalated, they could have done more. Imagine if they had a culture of gun ownership close to that of the United States. One that existed for decades prior.

In our country of 329 million, there are an estimated 393 million firearms. More than enough for every single person to be armed. Additionally, the culture of gun ownership means that people in the United States often know how to use them. I can only imagine how poorly trained the majority of Ukrainians are, in general. Many may not even know how to aim a gun, little less load, reload, clear malfunctions, etc. They certainly would benefit from learning the 4 rules of firearm safety as well.

It is also interesting to note how many liberals are cheering on the Ukrainian people. While I think this is a clear indication that gun control is terrible policy, I can’t help but feel that these same liberals will be begging for us to give away more gun rights in the not so distant future. Like Kira Rudik tweeted, she didn’t expect it to come to this. Yet, here we are.