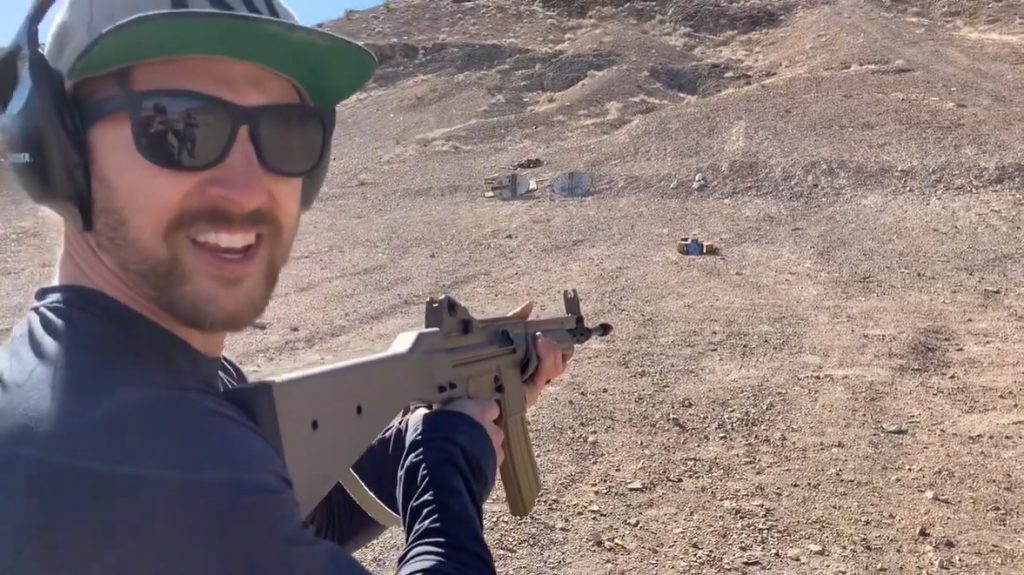 The Cetme L is a Spanish military service rifle chambered in 5.56 not unlike the HK93 Series of rifles from Heckler and Koch. However, despite both rifles utilizing roller delayed blowback, the two share no parts compatibility. The Cetme L was designed in Spain in the late 1970’s and was developed largely in response to the growing need to adopt a rifle chambered in the now-standard 5.56×45 NATO, thereby replacing their aging CETME-C rifles chambered in 7.62×51 NATO.

After it’s adoption in the mid 1980’s the rifle served Spain for less than a decade. It was replaced by the foreign designed HK G36, also chambered in 5.56 NATO. At the time, modern advancements in combat meant troops on the ground needed the ability to easily add optics, aiming modules, and other attachments for which CETME-L was not well suited.

The rifle, though similar in function to the HK93, utilized  AR-15, or STANAG magazines. It is capable of firing semi, or full auto, in it’s military form. It is largely constructed by affixing a barreled trunnion within a stamped sheet metal receiver.

The magazine release is found on the right side of the receiver similar to an AR15.

The right handed favoring selector, can be found just above the firing grip. It is on the left side of the trigger housing.

After inserting a magazine into the mag well, a small bolt release on the left side of the rear sight tower can be depressed. This allow you to drop the bolt and chamber a cartridge. Alternatively, the charging handle can be pulled rearward which will also release the bolt and carrier.

At nearly 8lbs, the perceived recoil from the 5.56×45 is truly a pleasure. The roller delayed mechanism is drastically different from the abrupt and immediate impulse found in other gas operated designs. The rear aperture is a flip sight, with a peep for 200, or 400m, and is adjustable for windage. The front sight is protected by two robust wings, and can be threaded up or down for elevation.

After parts kits began to show up in the states, manufacturers like Marcolmar began selling complete assembled rifles. Their website states “MarColMar uses original Spanish surplus parts, a new made in the USA receiver, a cold-hammer-forged and nitrided barrel (1-in-7), brand new US made furniture, all finished with Cerakote, to produce a beautiful new firearm that is now optimized for US STANAG M-16/AR-15 magazines.”

This rifle has been tested and functions well with GI, lancer, and Magpul magazines. However, the firearm does tend to prefer hotter 5.56x45mm ammunition.

.223 Remington will function in the rifle, and is safe to shoot. However, the weaker pressures of the 223 may not cycle the action completely, as the rifle was designed with military ball ammunition in mind.

This particular rifle also has the addition of a picatinny rail welded to the top of the receiver. This allows the use of modern optics.

The entire firearm is then cerakoted in various colors including the original Spanish green, FDE, black, and grey.

For those looking for something different, or who enjoy Cold War weapons such as myself, the Cetme-L is a unique and interesting part of military history that you’ve got to try for yourself to appreciate.