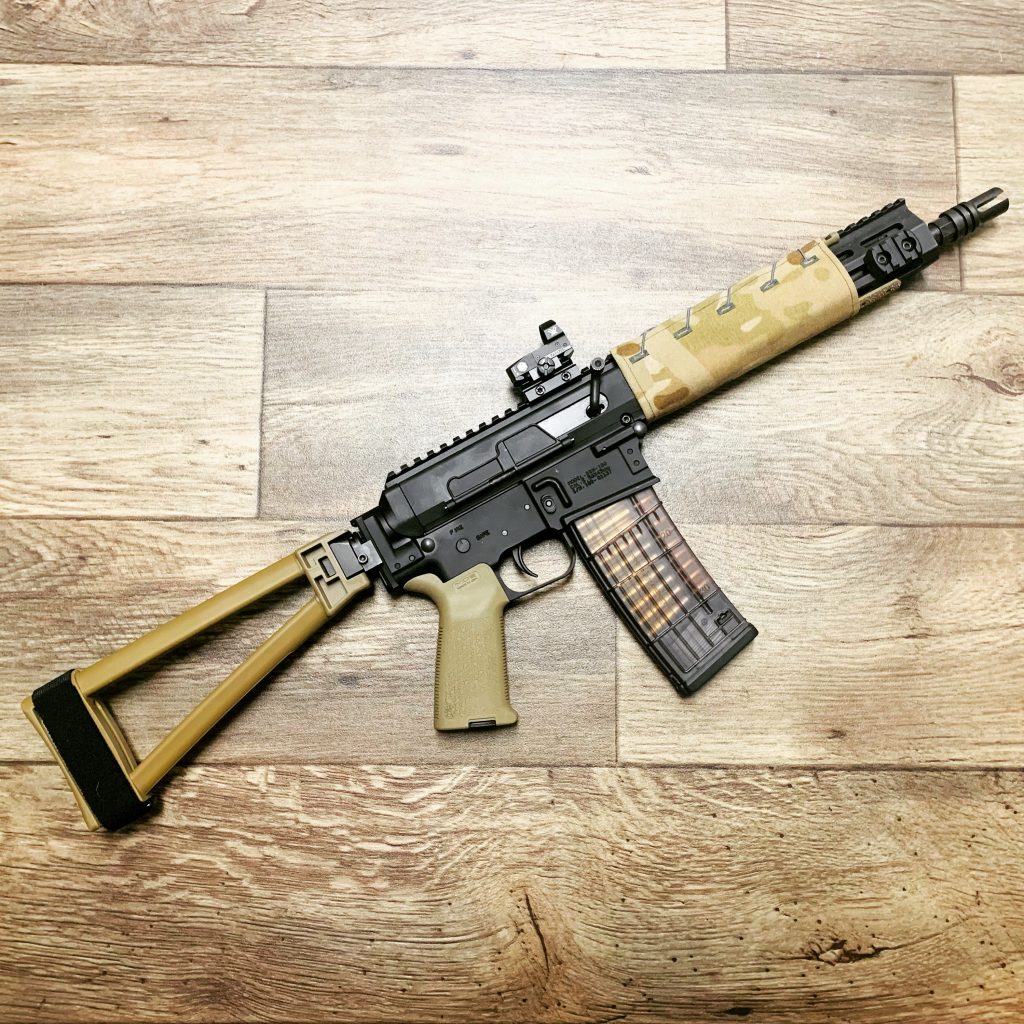 The BRN-180S is a unique AR-15 upper receiver that offers features not typically found on other AR-15s. It was designed with folding stocks or braces in mind, and includes a small round “bumper pad” on the left side of the receiver. This makes it easier to fold the stock or brace when needed. The BRN-180S also features a charging handle on the right side of the receiver, similar to AK designs. In this blog post we will talk about some of the interesting features of the BRN-180S, a short review, and our impression of it.

The AR-18, also known as the AR-180 (semi-auto version) was designed by Eugene Stoner as a follow up to his popular AR-15 design. Its design was similar in looks but there were not many true similarities between the AR-18 and the AR-15. So, the lower receiver on the AR-18 or AR-180 is different from the AR-15.

This specific upper is meant to be a legit AR-180 style upper that will fit on any milspec AR-15 lower. Since the major differences in the design are in the upper, this is convenient. With that said, you can get AR-15 lowers that mimic the looks of the AR-180 to some degree, and that is what we are using here.

The AR-180 is a more conventional design compared to many other rifles of it’s time. One particular difference between the AR-15 is that the BRN-180 utilizes a short stroke piston.

Additionally, the upper has no need for a buffer tube as all of the operational parts on the upper stay in the upper during firing of the rifle. That enables you to have folding stocks and braces. The rifle will fire with a folded stock.

The build quality is 10/10. It’s a short stroke piston, so there’s the slightest increase in recoil over a well tuned AR15. It does feature an adjustable gas block.

This is the shorty in 5.56, with a 10.5” barrel, mated to a Brownells lower that has picatinny for braces/stocks. It also has a picatinny adapter you can mount a folding brace/stock on a regular lower.

It ran flawlessly with a variety of ammo, including steel. I believe the upper is actually assembled either with or by PWS who does piston AR rifles. MLOK rail, free floated. The upper itself is a little hefty but when you account for the fact that it contains the recoil springs and guide rods – it makes sense. Not overly heavy, and I feel like it balances just fine.

The folding brace/stock option is particularly attractive to some. It can be very fun to play with, and it surely makes it easier to transport discreetly.

The three prong flash hider and jam nut is a little funny. They should have just gone with the traditional 1/2×28 with a shoulder instead of using a jam nut. However, that is a small gripe.

The disassembly is stupid easy. The guts of the upper pull right out of the back of the upper.

I like the dust cover but when the cover is down, there is an exposed area behind the bolt where debris/dirt can get into the trigger mechanism. This is also Garand Thumb’s biggest complaint on the upper/rifle. However, when the dust cover is up, it’s difficult for anything to get in there.

It’s actually slightly more functional than a real AR-180 because you can use the AR-15 bolt release like normal. The original design forced you to pull back on the charging handle to chamber a round on an empty chamber. In this case, you have the option to do either just like with the AR-15.

Overall, I am very impressed with this upper receiver and would recommend it to anyone looking for a unique sort of rifle to add to their collection. If you dislike the AR-15 design, this gives you most of the great ergonomics in a different type of design. Also a great option if you want to have a folding stock as an option.

Either way, Brownells seems to have done well with this upper. We were impressed with it.