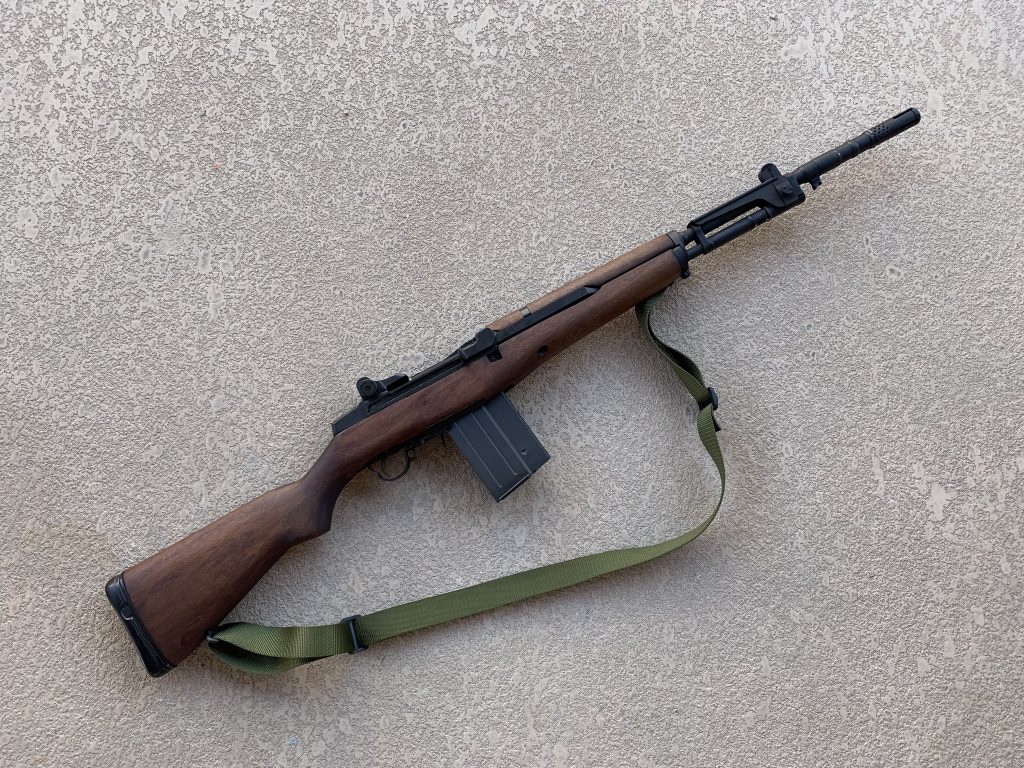 The BM59 is an automatic battle rifle that was developed in Italy in 1959. It is a 7.62×51 NATO rifle based on the M1 Garand. The BM59 has a 20 round detachable box magazine. The original military configuration was select fire. They also come with a folding bipod and a combined muzzle brake/flash suppressor/rifle grenade launcher. The rifle has a grenade launcher sight that flips up as well.

Original versions of the BM59 used M1 Garand receivers that were altered and rebarreled for 7.62×51 NATO, as opposed to 30-06 which the M1 Garand was originally chambered for.

The M1 Garand was called the “the greatest battle implement ever devised” by General George S. Patton. After WWII, the Italian military licensed the production of the M1 Garand. However, by the end of the 1950s it was already reaching a point of obsolescence. It was still considered a great platform from which to build up an improved design. So, Beretta began working on a replacement.

Although there are some similarities to the M1A/M14, the BM59 was it’s own improvement on the M1 Garand. Beretta kept the long action receiver from the M1 Garand, whereas the M14 replaced it with an abbreviated version. This is said to make the BM59 more pleasant to shoot than the M14/M1A.

However, Beretta did see fit to straighten the operating rod, just like what was done with the M14. The M1 Garand’s bent operating rod was long considered to be a weak point of the rifle. So, it was straightened and that was an improvement.

Beretta only took a few short years of development to convert existing M1 Garands to accept detachable box magazines. The M14 took nearly a decade to do the same thing. The magazines for both rifles are standardized at 20 rounds, though they are not interchangeable.

The BM59 is a great rifle that has been used by militaries all over the world. If you are looking for a unique and interesting rifle, it’s a great one.

The version which we have obtained was built by James River Armory. Obviously it is semi automatic only. These are built on a brand new cast receiver made by James River Armory and built with kits imported from Italy. It features a brand new barrel as well, but the gun is combined with new US made parts and surplus BM59 parts originally made by Beretta.

The cast receiver might bother some people. However, Springfield Armory’s M1As have a cast receiver as well. I’ve read reports about some of the early BM59’s with cast receivers having problems or being improperly heat treated.

The folding bipod is pretty heavy, so in this case, it has been removed.

It is said to work best with modern milspec 7.62×51 NATO (M80) brass ammunition. However, we tried it with steel case ammo and it ran just fine. You can watch the video of the first shots below.

Overall, the BM59 is a great rifle. It’s unique and interesting, and it’s a lot of fun to shoot. If you are looking for something different, this is a great option. Thanks for reading! I hope you enjoyed this blog post about the BM 59 by James River Armory. Stay tuned for more posts like this in the future.