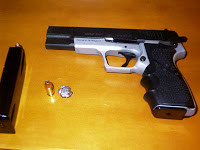 I bought this gun from Aimsurplus.com about 3-4 years ago for about $250-300 if I recall correctly. For what I paid for it, I figured I couldn’t go wrong. I was right. This gun treated me well from start to end.

These Bulgarian made Browning Hi-Power clones are very similar to the real thing in feel, function, and even use many of the same parts and mags. These are noticeably more “blocky” than the original Browning Hi-Power and even weigh slightly more.

It was great for the money, but I still made some changes to it. The first thing I did was remove the magazine safety, which is one of my least favorite features of the BHP design. However, it was an easy fix.

The removal of the magazine safety left some play in the trigger, but this was easily remedied with the purchase and installing of a Wollf trigger spring for just a few dollars.

On top of that, the parkerizing on the slide was not very durable and I scratched it within the first day or so. I refinished it in black (the original color) with KG Gun-Kote (highly recommend) and it turned out great.

The firearm came with two factory 10 round magazines so I bought two 13 round Mec-Gar mags (they take regular BHP mags), all functioned fine.

The heavy steel frame combined with the 9mm round made for a very pleasant and easy gun to shoot. I found that women and new shooters usually benefited from this tremendously and shot it most accurately.

I only ever had one failure with it and that came after a piece of lint or debris got caught in between the hammer and the firing pin (one of the reasons I am paranoid about weapons with external hammers).

Although it was extremely reliable and fun to shoot I ran into some issues with it that I simply could not resolve.

Holsters were hard to find for it due to it’s unique blocky design as it would not work with most BHP holsters. I eventually found a holster for it, it was a cheap OWB nylon Uncle Mike’s. I never did like this holster, and I believe a good quality holster is a must for a handgun.

Another issue was the fact that I’d kept hearing that BHP’s do not handle +P ammo well and I wanted to make my defense load 124gr +P Speer Gold Dots. I didn’t want to put this to the test, so whether it is a fact or not with the BHP or even this clone I don’t know for sure.

Lastly, since I tend to see handguns as conceal carry weapons, I have a hard time with the larger heavier guns out there. It would make a good bedside stand gun, a decent open carry gun, and an excellent range shooter. However when I weighed it against a Glock 19(which is what I had my eyes on), it had no chance.

The Glock was lighter, smaller, held 2 more rounds, had a huge selection of holsters, shot +P ammo with no problems, and didn’t have an external hammer (all positives in my book). I also shot the Glock very well and knew it would be reliable, so I saw no downside to getting rid of the Arcus-94.

I miss this gun at times, and I wish I could have kept it, if only as a range shooter and/or a gun to teach new shooters on. However, I was never quite satisfied with it as I always looked at real BHP’s and felt that they were much more desirable. So, I imagine that I may end up with a real BHP sometime in the future.