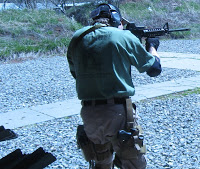 A Federal LE agent trains with his AR15

Law Enforcement and the AR15
The AR15 is seeing more and more action in law enforcement. High profile gun battles like the North Hollywood shootout, the Miami Shootout, and other not so high profile shootouts have prompted police departments and other law enforcement agencies like the FBI to rethink their caliber and weapons philosophies.
In both of the scenarios mentioned above, officers/agents armed with handguns and shotguns proved ineffective vs. a smaller number of enemies with rifles.
In the case of the North Hollywood shootout, the suspects had illegally converted full auto rifles and body armor. Officers finally got their hands on AR15’s and ended the 44 minute fight. Thankfully, no officers or civilians were killed, despite the suspects having fired over 1,000 rounds of ammunition. 17 people were injured.
In the aftermath, the Los Angeles Police Department was quick to adopt M16’s for patrol officers. Had officers had AR15’s when the fight began, it would have likely ended MUCH sooner.
In the case of the Miami shootout one suspect took 6 rounds and another took 12 rounds before succumbing to wounds. In the end, the 2 suspects were dead and so were 2 agents. 5 other agents were wounded.
In the wake of the Miami shootout, the FBI initially looked to upgrade the handgun rounds that their agents carried. After 15 years or so of their love affair with the 10mm (MP5’s) they discovered through testing that the 5.56 round was not only more effective against suspects with body armor, but that over penetration at CQB ranges was greatly exaggerated and 5.56 penetrates less in human tissue than most common pistol rounds (including JHP’s) on average.
They are not purchasing any more MP5’s. The FBI is acquiring and training their agents with LAR-15’s made by Rock River Arms, as is the DEA among others.
This is a trend and it is not going away.
AR-15 History Part IV