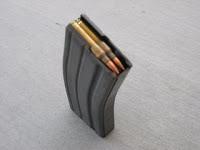 Along with the bolt, magazines are another area that some consider to be a weak spot in the AR15 design, or at least until some of the newer options out there have come about. All magazines should be tested for function before being relied upon for serious use.

These magazines are the standard, 20’s and 30’s. USGI magazines are aluminum, hard-coat anodized and covered with a moly dry-film or in some cases Teflon.

Keep in mind that most AR-15 manufacturers sell their rifles with USGI magazines although they often swap out the floorplates for their own. They can often be found for around $10-12 in NEW condition.

These, along with the USGI mags are among my favorite magazines. Released by Magpul in early 2007, these PMAG’s have quickly gained in popularity due to abuse and torture tests that show how reliable and durable these mags truly are. Unlike most past polymer/plastic magazines, these appear to be high quality. PMAG’s may solve one of the long time AR15 dilemas, making the AR15 magazine more reliable and robust.

I only say “may” because they appear to have fixed it, but they haven’t been out long enough to know how they will hold up long term. They also come with a high quality follower that needs no upgrading and are available in 20 or 30 round versions.

They even come in various common weapon colors as well (I like Black personally). Prices are slightly higher than those of USGI mags by a few dollars ($13-14 is fair) for the standard PMAG, and a little more for the windowed versions. I’m not ready to sell off my reliable stockpile of USGI mags, but I have been acquiring PMAG’s to compliment my overall stash. 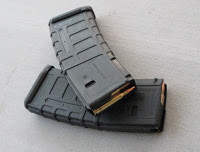 In general, aftermarket magazines are unreliable, out of spec, and poorly built with prices to match. That is usually the allure of these magazines but most people will quickly find out that when you buy right the first time you only buy have to buy once.

H&K magazines are loved by some, hated by many. My gripes with them are that they are much heavier, slightly bigger, and MUCH more expensive (the cheapest ones I’ve seen are close to $35). Just like most HK products, overpriced and overhyped. Orlites, developed for the Israeli Defense Forces and are made of a black nylon and can be quite reliable. They are however not very durable when compared to USGI magazines.

Thermolds are decent as well, but they aren’t great. They are nicknamed “Thermelts” by some because they can melt when used in a very hot weapon.

Orlites and Thermolds make good range magazines, but they don’t hold up as well as USGI magazines or PMAG’s.

The vast majority of 40 round magazines out there are made by cheap, low-end manufacturers. Don’t even bother with them. Avoid Ramline, Eagle, ProMag, Wetern Metal Products, and especially USA.

Current USGI followers are green with an anti-tilt “leg” in the front, as opposed to the older USGI black follower that was more prone to tilt. Green followers are a big improvement on the black followers. They make it more certain that your ammunition is lined up in order to feed properly and reliably. You should at least have the green followers in your curved magazines.

All USGI magazines being made and issued for the military were required to have green followers as of 1991. Better than the black followers. Magpul makes a follower (Enhanced Self-Leveling Follower) that is even more effective than the green follower. It simply drops into your magazine in place of your old follower. These followers are usually brown, gray, or red and they are a very good design (I think they made a few in a “glow in the dark green” as well).

They were created with the intent to make the standard AR-15 magazine as reliable as possible and eliminate any tilting. They borrowed very little from the traditional black and green follower designs. Looking at the Magpul Enhanced Self-Leveling Follower one can see how all sides of the magazine would be engaged by the follower, making it nearly impossible to tilt.

They are a foolproof improvement on the green followers. May not be 100% necessary, but having them can’t hurt. These are the best followers out there for your USGI mags.

I am convinced that these are a complete waste of money. Not only do they make the carbine heavier and unwieldy, they require more maintenance and don’t tend to be all that reliable in comparison to better options. They are also ridiculously priced in the $200+ range. I would stick to 20’s and 30’s, PMAG’s and USGI mags (you can buy a lot of quality magazines for $200 in comparison).

How Many Magazines to Have

You really cannot have too many reliable magazines. I would say that you should have a bare minimum of 10 reliable magazines per rifle, but 12-20 per rifle is probably a better idea. There really is no such thing as too many mags (or too much ammo).

AR15 magazines in general were originally made to be somewhat disposable (once again, maybe something fixed to some degree with the PMAG’s). Also, you never know when another ban will come about that will shut down the current production of higher capacity magazines. BUY THEM WHILE YOU CAN! Some folks prefer 20’s because they are better for shooting prone.

I keep primarily 30’s, but have a handful of 20’s as well. If you keep bad magazines around make sure they are marked very well. The only reason to keep a bad magazine around is for malfunction clearing drills.

Some folks insist on downloading magazines, like the 30 rounders to just 28 rounds, so they can insert a new loaded magazine with a closed bolt (tactical reload). I don’t have a problem with any of my magazines (fully loaded) when inserting them into the mag-well on a closed bolt. Test yours and see how they function. Act accordingly.

You can get 10 round stripper clips for pretty cheap and they are a good idea to keep around. You can load 20 and 30 round magazines in seconds with stripper clips that are already loaded up. They would be the preferred method of storing. I load my ammo in stripper clips (in some cases bandoleers) and store them in ammo cans.

Have plenty of stripper guides! Although magazines aren’t a bad idea either it’s unlikely you will have enough magazines for all of the ammunition you store. The LULA is a handy device for loading magazine quickly without stripper clips. It isn’t quite as fast but it will work well in general. It loads and unloads magazines quickly and easily. I don’t anticipate I or you will need to reload magazines super quickly after a long shootout… but who knows… and if you pay to shoot at a range per hour, time is best spent shooting rather than loading.

They can throw off the weight of your magazine to one side and cause feeding malfunctions. Your magazine catch was not made to handle that stress of an extra loaded magazine on one side of your weapon either. You can also bend your feed lips and/or get dirt and other undesirable stuff in your reload magazine and that wouldn’t be a good thing. I avoid them. A buttstock magazine pouch isn’t a bad idea but I don’t use one personally.