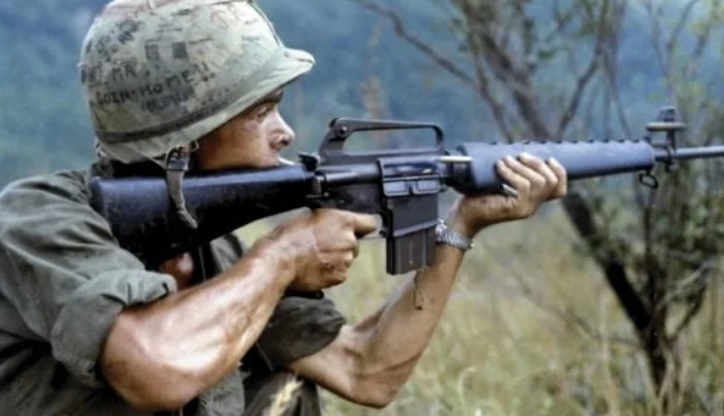 Because of the sudden adoption of the M16, there were several bugs that needed to be worked out. We were in the beginning of the Vietnam war so the M16’s flaws were not only quickly discovered, but they were also a cause for concern and worry. The M16 was incorrectly labeled as “self cleaning” (so no cleaning kits were issued) and it lacked a chrome-plated chamber and barrel to protect against corrosion/pitting.

Furthermore, the US military changed the “stick” powder (that the AR-15 was designed for) to “ball” powder in order to increase the velocity of the 5.56. This change of powder led to more fouling and build up due to it’s burning characteristics.

M16A1: The M16A1 was the same as the M16, except for the addition of the forward assist, “fence” around the magazine release, chromed bore/chamber, and new birdcage flash hider (which was closed on the ends to prevent it from catching or snagging things), and 1/12 twist rate for better stabilization of the M193 cartridge in colder weather. The chrome plated and slick-sided bolt carrier was replaced with a parkerized “notched” bolt carrier that worked with the forward assist. It was standard issue from about 1967 through 1985 or so.

These mistakes forced the US military to look for the vital improvements that helped make the AR-15/M16 what it is today. When the M16 got a chrome lined bore, the troops started getting cleaning kits and learned proper maintenance, the reliability issues started to vanish quickly. The AR-15 lacked in many areas during the early Vietnam era, so it earned itself a stigma that has stuck around long after the bugs were worked out.

M16A2: Introduced in 1983 and adopted by all branches a few years later, it featured a longer, stronger buttstock, round handguards, more complex rear sight with different sized apertures, brass deflector, a slightly different pistol grip, closed bottom birdcage flash hider to reduce dust signature and act as a compensator, heavier government profile barrel (light under the handguards) in 1-in-7 twist as a compromise of the best twist rate for the 62g M855 ammo (with a steel penetrator for better performance on Soviet helmets at 600 meters and light cover) and the M856 tracer round (which was much longer than the M855 round due it needing to store the tracer compound). Selector switch, safe, semi, and burst (3 round). Most changes were prompted by the USMC.

Nowadays the M16 and it’s shorter counterpart, the M4 (along with all of it’s variants), are highly regarded in general and heralded for their supreme accuracy, ergonomics, modularity, and proven service record throughout several wars and decades of service with the US military. Still in wide use with our military and others, including special forces units and LE agencies. It is the most commonly produced rifle chambered in 5.56 out there.

M16A3: Everything similar to the M16A2 with one exception Safe, Semi, Auto. In limited use in the military, mostly by the USN.

M16A4: Changes include a flat top upper for mounting of optics (in this case, an ACOG) or a detachable carry handle and KAC M5 RAS rail system. Along with the M4, the M16A4 (also referred to by troops as the “A4”) is the current standard US military service rifle. Safe, Semi, Burst. Primarily produced by FN for the military.

M4: Essentially an M16 with a shorter barrel (14.5” light under the handguards) that includes a “notch” in order to attach an M203 grenade launcher, adjustable stock, flat top upper, etc. Becoming much more popular in the US Army and USAF. The M4 selector switch is Safe, Semi, Burst. The M4A1 is Safe, Semi, Auto. Developed by Colt from the Commando/XM177 variants utilizing the newest developments with the M16 and the shortest barrel for optimum reliability determined by Colt.

Currently, the complete M16A4’s being made for the US military are being produced by FN and Colt holds the sole contract for the M4 Carbine. Around the world, the AR15 design is being used and employed by many of our allies and other nations, some made by Colt, FN, H&K, Bushmaster, etc.

The British SAS like it so much they have insisted on the M16/M4 over the UK standard military issue SA80. Civilian AR15’s Colt kept the trademarked AR15 name originally given to it by ArmaLite when they began marketing the semi-auto version of the rifle commercially to Law Enforcement and civilians. AR15 stands for the “Ar” in ArmaLite (model) 15.

Although trademarked by Colt, “AR15” is generally used by most gun enthusiasts (including myself) as a generic term that refers to all of the “clones” out there, and there are many.

Many companies use a slight variation on the term on their actual rifles to set them apart yet keep the general idea, e.g. Bushmaster as the XM15, Rock River Arms as the LAR-15, Stag as the Stag-15, etc. but they still usually get referred to generically as AR15’s.

Similarly, many people refer to semi auto civilian 14.5-16″ AR15’s as either an M4gery or simply “M4”. Bushmaster started using the term “M4” in reference to many of it’s models and Colt eventually responded with a lawsuit, claiming that Bushmaster had attempted to copy the look and unlawfully steal the trademark.

Bushmasters reasoning was that the term was a US military designation and to a large degree was a generic term. Bushmaster ended up winning the lawsuit.

The civilian AR15 has developed and benefited tremendously from lessons learned in the military and from the testing done by Colt and others in order to make as reliable and as desirable of a weapon as possible.

The Assault Weapons Ban and the AR15 AR15’s have seen an ever increasing amount of popularity in the past few years and have become what many would consider a mainstream rifle these days.

In 1994, US Congress enacted the Assault Weapons Ban otherwise known as or referred to as “AWB”. It had a 10 year sunset provision (which meant that it would expire in 2004 and would need new legislation in order to keep the laws in effect past that time).

The AWB limited many of the “evil” features of the AR15 (as well as any other semi auto rifle with detachable mags), specifically making it illegal for any AR15 made after September 1994-2004 to have more than one of these features (with exceptions to military and LE weapons). They included flash hiders, pistol grips, collapsible stocks, and bayonet lugs. It also limited manufacturers from making any magazines that could hold 10 or more rounds and had several other ridiculous laws pertaining to features that weapons were not allowed to have.

Well, luckily for us, when 2004 rolled around Congress re-enacted no new legislation (they tried, but it failed) and in September of that year it became completely legal to own an AR15 with all of the evil features outlawed by the AWB.

However, some states, counties, cities, etc. have their own regulations on these types of weapons. Sales of AR15’s and related rifles, as well as “high capacity” magazines went through the roof shortly thereafter. The AWB appears to have backfired. What was suppose to keep these weapons off the streets now appears to have fueled a desire to buy that which not too long ago was illegal and could get you serious jail time in a Federal prison. The amount of AR15 manufacturers out there has sky rocketed since the end of the AWB. For the first year after the AWB expired, many manufacturers had 6-8 month waiting periods on new rifles and/or parts.

New magazines in full capacity can now be had plentifully and readily as well as inexpensively.

The AR15 is mainstream now. It is not only extremely popular amongst Law Enforcement, but many people seek to build or buy AR15’s for their own personal home defense, hunting, emergency preparedness (and protection), target shooting, plinking, and even zombie and alien invasions (not my personal style, but you never know).

There are an incredible amount of manufacturers out there as well. Although many of them do little “manufacturing” and most are more like “assemblers” who do a little finishing and inspecting to varying degrees. Only a few forges are producing the receivers, barrels, and other parts for all of the variety of companies out there. Some of the more popular companies out there are Colt, Bushmaster, LMT, Stag Arms (the house brand of CMT), Rock River Arms, DPMS, Olympic Arms, ArmaLite (not the original company), Cavalry Arms, CMMG, Charles Daly, Noveske, Smith and Wesson, Double Star, Wilson Combat, Lauer, DSA, BCM, and even Remington (yes, Remington) just to name a few.  Look for AR15 History Part III here