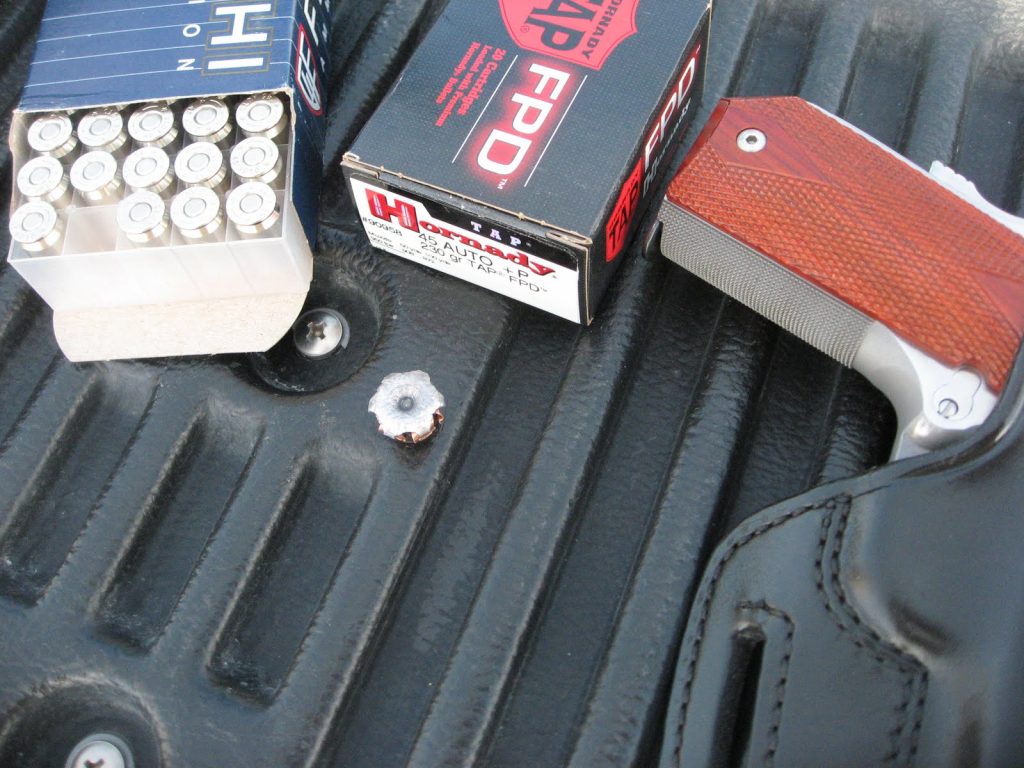 Recently I tested out some Hornady .45ACP 230gr +P TAP with some bare water filled milk jugs. To compare with, I also brought along some .45ACP 230gr Fiocchi loaded with the same XTP bullet. The Fiocchi came in a 50 round box and the Hornady came in a 25 round box, and both boxes cost around $20, essentially making the Hornady twice the price per round of the Fiocchi.

Both loads were fired out of a 4.25″ barrel and both fed fine in my Dan Wesson Commander Classic Bobtail 1911.

In the case of both loads, they penetrated into the fourth jug, which is pretty good. At first I found this interesting given the Fiocchi is not advertised as being +P. However, Fiocchi is also known for loading their ammo hotter than most of the domestic ammo manufacturers here in the US do. The Fiocchi box says it is made in the US though, so I don’t know what to think… I really need to get a chronograph for these tests!

Unfortunately, I have misplaced the bullets since I conducted the test but what I recall from the measuring that I did was that they did not expand as much as some others I’ve tested out in .45ACP 230gr such as the HST or the Gold Dot. This was evident just by looking at them as well. Expansion appeared the exact with the Hornady as with the Fiocchi.

If and when they turn up I will measure them again and re-post the exact measurements.

This isn’t exactly brand new cutting edge bullet technology. It’s been around for a while. That said, they have proven to be a good design that reliably expands, works well, and are capable of being very accurate. I have heard that they struggled to expand as well through 4 layers of denim.

At the price I paid for the Fiocchi, it was just a few dollars more (for a box of 50) than what I pay for 230gr FMJ practice ammo. Certainly this is a quality self defense load at a great price that you could afford to do plenty of testing with and even stock up on.

I would feel confident with either as my carry load as I noticed no difference whatsoever in their performance. Penetration was pretty good and expansion was adequate.